This is an online reduced version (only 6x6 sized chessboard, and ony 6 pieces per player) of American Checkers (or British Draughts) game, designed to be played by two network connected players. Both players must have an iPhone with a network connection (wifi or 4G) and with this app installed. Moreover, they must agree to play an online game at the same time, opposing to each other.
The first time you launch the game, you will be assigned an unique numeric player code. This code will be stored on your iPhone, and it will always be used to identify you, every time you will launch the game. It is always shown on the upper text box.

To start a game, just hit the Start New Game button, and the system will try to find an opponent for you. The match is not immediately granted: it will depend on the presence on the network of at least one player looking for an opponent player. Maybe you have to wait for some time before finding a match.

Need help? Use our Mini Draughts Walkthrough page or sign up and make your contribution today.

Mini Draughts is a strategy game developed by Luigi Fonti and released in February 2017. You can download the app on iOS 10.0 and later on the following devices: iPhone 13 Pro Max, 12 Pro, X, SE, iPhone 8, 7, iPad Pro, and iPad Mini.

Correction of a small bug

You can quickly download Mini Draughts iPhone/iPad and Android app by clicking the download buttons or scanning the QR code below. 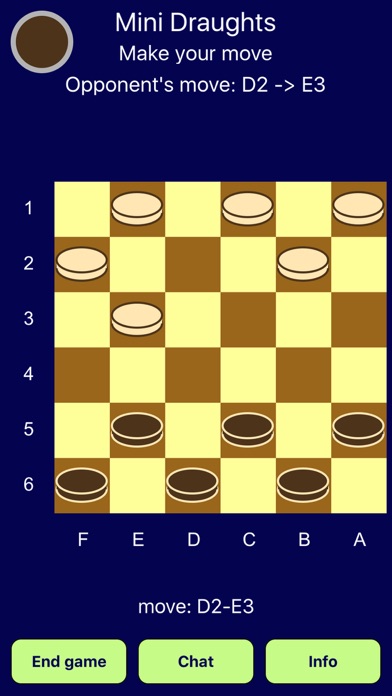 Mini Draughts has 0 reviews across all iTunes Stores.