Reviews:
★ "Games of the Week: ...this is a perfect little motocross game. Giant Moto is all about jumps, turbo boosts, and scoring the best time. It's reminiscent of the Nintendo classic ExciteBike--but a lot purtier, to be sure. Well worth 99 cents."

★ allaboutthegames.co.uk: "Though there are a million and one tedious physics-based bike 'em ups, there's never really been anything as smooth and slick as Giant Moto."

★ TouchArcade: "I can't wait to get my hands on this game, as I've been waiting for a truly excellent Excitebike-like game for the iPhone."

★ 148apps: "Giant Moto is a fun, faithful homage to the video game classic Excitebike, providing players with an improved, updated pick-up-and-play arcade racer that stays true to the original."

Need help? Use our Giant Moto Walkthrough page or sign up and make your contribution today.

- Added retina graphics and iPhone 5 widescreen support! - We fixed the "white screen" bug that some users were reporting. - Now you can do forward and backward flips by tilting the device. - New control layout that's much easier to use. - Improved performance.

Giant Moto is a racing game developed by Rocket 5 Studios Inc, and is available for download on both iOS and Android devices. The app is compatible with iOS 4.3 or later on the following devices: iPhone 6, iPad Air and iPad Mini. 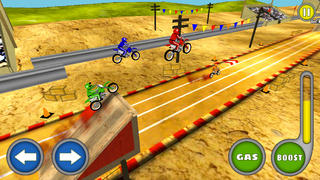 Review: Almost 5 Stars Add the ability to build your own tracks, and you'll get a 5. I'd even pay a little more for a...

Review: WOW.DID I JUST GET AN UPDATE ON THIS ONE? I'VE BEEN WAITING OH SO LONG FOR AN UPDATE.THANK YOU FOR GOING BACK TO THE DRAWING BOARD & COMING UP...

Review: just like excite bike on Nintendo this game is amazing! the other bad reviews are dumb and they don't know how to play! I just got...