Free today with App of the Day
Get the Game of the Year** now! ORBITAL is a 1-thumb experience with a simple goal: score points by destroying orbs. A simple puzzle game for all with beautiful visual effects, it can be played in short sessions and is highly addictive.

WHAT THE CRITICS SAY

«A picnic to understand, but a marathon to get beyond the first few minutes, Orbital's simple style is perfect for those looking for fill the odd spare moment.» 8/10
- Keith Andrew (pocketgamer.co.uk)

«Orbital is the most visually appealing brick breaker type game that I have ever laid eyes on and had the chance to play.» 5/5
- Mike (iphoneincanada.ca)

«While there are already a few iPhone games that share the same gameplay mechanics as Orbital, none of them look anywhere near as cool.»
- Eli Hodapp (toucharcade.com)

«BitForge has managed to combine the addictive gameplay of Peggle and the beauty of Geometry Wars, two digital forms of crack, into one easy to use package.»
- Chad George (thatvideogameblog.com)

«Orbital takes simple gameplay and dresses it up with a unique “gravity” feature and enhanced graphics. The game can be very frustrating at times, but that won’t keep you from coming back for another try.» 4/5
- Will Raskin (148apps.com)

«Orbital has got fantastic graphics and unfussy features. Come to think of it, there are really no negative points about the game. Good going, Bitforge!» 5/5
- Yoyo (iphonefootprint.com)

You must shoot orbs into a grid with your cannon. The orb you fired will expand until it touches a wall or another orb. Each orb contains the number ‘3’, which decreases by one every time it is hit. After 3 hits they explode and you earn a point. The game could be endless… There is just one condition: a shot orb must not touch the death line above the cannon! If it does, the game is over.

A simple concept to rack your brains and nerves.

ORBITAL is based on Gimme Friction Baby by Wouter Visser.

Need help? Use our ORBITAL Walkthrough page or sign up and make your contribution today.

We are celebrating 5 years of Orbital and we’re happy to present a small but much anticipated update with a range of improvements. The newest version of Orbital displays nicely on high resolutions and supports current 16:9 screens natively. And since it is built as a universal App it runs better on the iPad than ever. Finally you can again connect Orbitals Leaderboard to Facebook to compete with your friends in all game modes. Also the game now keeps the score if it gets suspended and the game music now stops if you start listening to your own music. Thank you for playing Orbital – have fun!

ORBITAL is a puzzle game developed by bitforge, and is available for download on both iOS and Android devices. The app is compatible with iOS 7.0 or later on the following devices: iPhone 11 Pro, X, Xs, SE, iPhone 8, 7, 6, iPad Pro and iPad Mini. 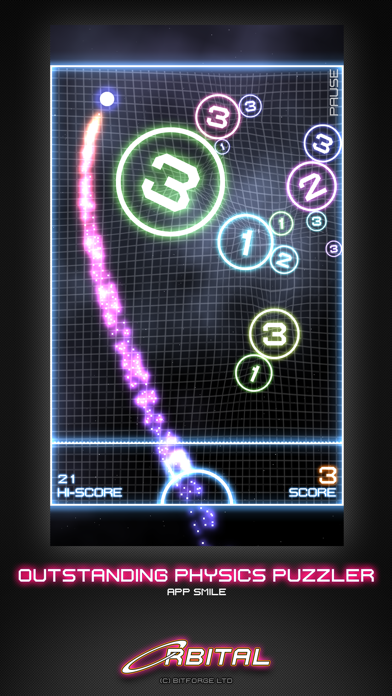 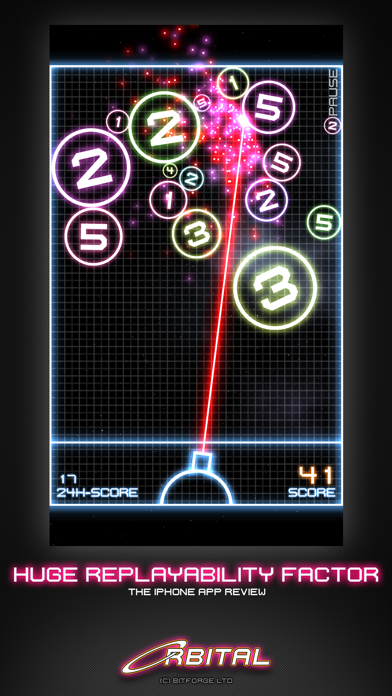 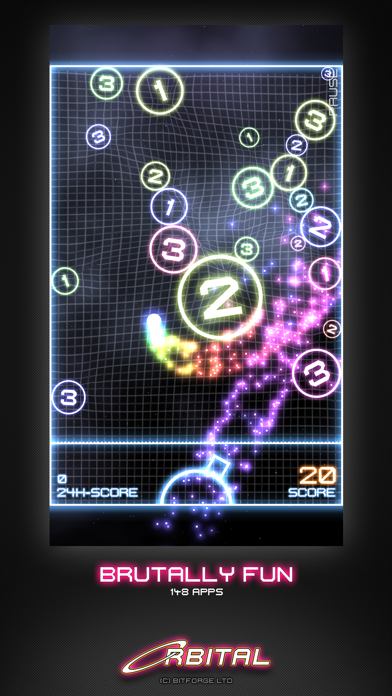 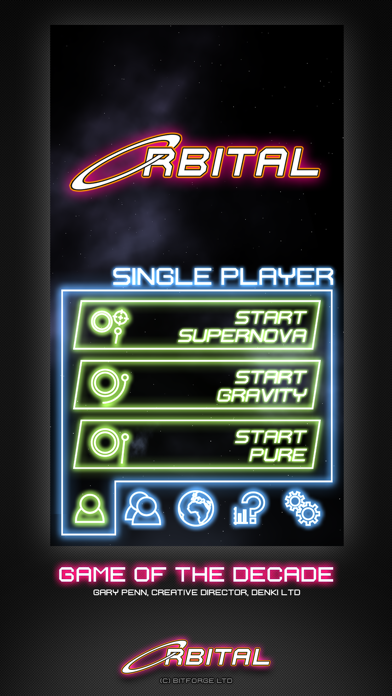 Review: Best. Game. Ever. I’ve had Orbital since my first iPhone (4s) and I LOVE it. I only play Gravity mode, which is...

Review: My favorite This is one of the first games I downloaded for my iPhone. That was many years ago. It is still...

Review: 2019 Anyone who got this almost 10 years ago still play? I still miss the old title screen song.

Review: Challenging... ...and so hard to put down! That was my original short review from many years ago when you first brought...

Review: I’ve had this game for a long time... And I still love it. I especially like SuperNova mode. A great time waster.