For some awesome videos of some of the domino runs, rallies and lines you can create check out our YouTube video at:
http://tinyurl.com/DominoDemo

In Domino Domino you are able to create endless creations of domino runs. The thing that really sets the app apart is the premade domino objects such as slides, stairs and mouse traps.

"As a kid, I had no interest in actually playing the game of dominoes. I considered it a game that old folks played, and it just seemed boring. Instead, as I assume most kids chose to do, I decided to create elaborate courses with the dominoes that I eventually knocked down, only to do it all over again. Eventually my parents got so sick and tired of me stealing the dominoes, they decided to give me a game for my birthday called Domino Rally, which was basically dominoes with unique pieces and contraptions that allowed you to do more with dominoes than you could ever imagine. Domino Domino is a game for the iPhone and iPod touch that brings back those sweet, sweet memories." - Tyler Tschida - www.appleiphoneapps.com


After you have created you master piece you can then watch the run tumble down in two modes. The automatic mode follows behind the tumbling dominos giving you a birds eye view as the action unfolds. In manual camera mode you are able to navigate around in 3D space to watch the action from any direction and angle you want.

If you are a fan of domino toppling, creating elaborate domino runs or domino rally then this is the app for you. We hope that you have as much fun playing it as we did building it.

Domino Domino Lite limits you to 75 dominoes and 3 objects. If you hit the domino limit just erase some of the dominos and/or objects in your run or start a new run to continue. If you love the game, upgrade to the full version of Domino Domino to unlock unlimited dominoes and 9 objects.

Need help? Use our Domino Physics Runs Lite Walkthrough page or sign up and make your contribution today.

Domino Physics Runs Lite is a free-to-play, action and strategy game developed by Clever Coding LLC, and is available for download on both iOS and Android devices. The app is compatible with iOS 2.2.1 or later on the following devices: iPhone 6, iPad Air and iPad Mini. 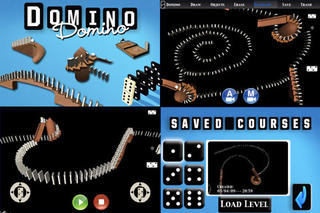