Lost Frontier is a turn-based strategy game, brought to you from the creators of the Battleheart and Zombieville series'. In a fantasy-western setting consumed by steam-punk technology and the supernatural, can you survive with just your wit and a six-gun at your side?
Features:

• Story Mode - Play through 24 chapters that introduce you to the gameplay, characters, and world of Lost Frontier.

• Challenge Mode - once you've mastered the mechanics, put your knowledge to the test in a series of 20 demanding missions.

• 20 Unique Unit types - take command of a wide range of Wild West forces, from Gunslingers and Cavalry to civil-war era Cannons and Gatling Guns. Or, employ more exotic weapons like steam-powered Gyrocopters and Zeppelins, and enlist the help of dark forces like Werewolves and Necromancers.

• Living Legends - choose a "Living Legend" as the leader of your forces. Each of the 9 unique legends grow in power as you play with them, and promote different play styles. Will you pick your foes off from a distance as Wyatt "Long-Arm" Wilcox, or focus on brute force with the help of ace gunslinger John "6-eyes" McGraw?

• Custom Games - choose from a variety of maps, set up the rules, and play with or against AI or human players via local, hot-seat play.

Need help? Use our Lost Frontier Walkthrough page or sign up and make your contribution today.

Lost Frontier is a strategy game developed by Mika Mobile, Inc, and is available for download on both iOS and Android devices. The app is compatible with iOS 6.0 or later on the following devices: iPhone 11 Pro, X, Xs, SE, iPhone 8, 7, 6, iPad Pro and iPad Mini. 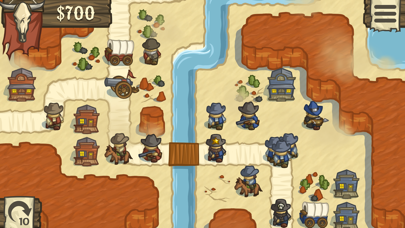 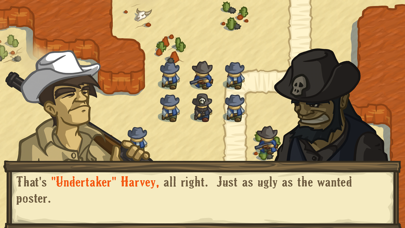 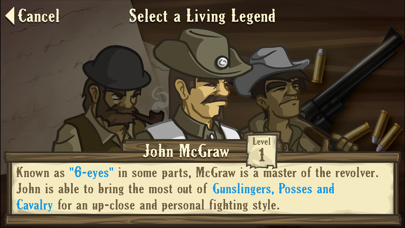 Review: 'Nice graphics, sound and art however..' 'There are a few minute details which high end turn based strategy games feature. One day into the game, I...

Review: 'Fun and challenging' 'Mika Mobile has done it again! I love this one, Mika Mobile’s charming graphics shine. It feels great to...

Review: 'what great game with no loot box garbage' 'This plays a lot like advance wars/command and conquer. Way better than any other iOS games I’ve played...

Review: 'I enjoyed it' 'was looking for something similar to Advance Wars... decided to try this one... & i’m glad i did. this is...

Review: 'Great game short on content' 'Don’t get me wrong this game is amazing but I feel like there could be more as in maps,...