MusicBox is the best way to save albums and songs for later. You can use it to keep track of new music you want to listen to later, catalog and organize favorite albums and songs, categorize music with tags, assign notes, manage metadata, and more.
MusicBox collects relevant metadata of albums and songs from Apple Music and Spotify, and is deeply integrated into the system with features such as Widgets, Share Sheet, Shortcuts, iCloud, and more.

ORGANIZE YOUR ALBUMS AND SONGS

- Apply tags to categorize your music and make it easier to find.
- Use Auto-Tagging to automatically tag albums and songs based on rules you set.
- Deep Search allows searching your music by title, artist, genre, record label, tags, type, and notes.
- Create a Smart Search to automatically filter albums and songs based on a set of rules.
- All MusicBox features and data are available on the Shortcuts app, so you can create custom shortcuts and automate your workflow.
- iCloud keeps your database in sync between your iPhone, iPad, and Mac.

- Easily access your music from the Home Screen with customizable Widgets.
- Play using the system's music player.
- Tap an album or song to open it on Apple Music or Spotify.

MusicBox is a modern app with support for the latest system features. It is also available on the Mac as a universal app, so you can enjoy it with a single purchase across iPhone, iPad, and Mac.

Tags • You can now create an Apple Music playlist from a tag. Press and hold a tag on the Start Screen (iPhone) or Sidebar (iPad), and choose "Create Playlist". • Added a new modal view to manage an item's tags. Available in the context menu when we touch and hold an album or song. • Added the option to count played albums and songs in the total number of items of each tag. Go to Settings > User Interface to configure. • Added the ability to edit a Tag and Smart Search when long-pressing them on the Start Screen/Sidebar. • Added the ability to create a new tag from the Manage Tags screen. Add and Manage • Added the ability to search and add albums directly from Apple Music. • The Notes field now formats Markdown text. It accepts **bold**, *italic*, ~~strikethrough~~, `monospaced` and [link](https://apple.com) text. • Added a search bar in the Batch Edit screen. • The Batch Edit screen now allows you to select and edit items without having to tap the Edit button first. Play Music • Added Odesli as an option to view albums and songs. • Added the ability to open albums and songs in Marvis Pro. Go to Settings > General > View Albums and Songs In to configure. • Added a menu when we press and hold the View button to choose where to view the item (Odesli, Albums, Marvis Pro, or iTunes). Shortcuts • The Get Music shortcut now supports album covers. Set the Load Artwork parameter to true to enable. Note that this causes the action to run slightly slower and that large lists may reach the memory limit earlier. • Added "Music ID" as an attribute to the Get Music shortcut response. • Added new filter options to the Get Music shortcut: Type, Genre, Label, Released After, and Released Before. • The Get Music shortcut now shows the number of items found when run. Bug Fixes and Improvements • Fixed a bug that caused the Open Details button from the context menu to not work. • Fixed a bug that caused the extra-large widget to show fewer albums than what actually fits. • The Send Feedback via Email action now uses the user's default mail app.

About MusicBox: Save Music for Later

MusicBox: Save Music for Later is an application developed by Marcos Antonio Tanaka and released on iOS. The app is compatible with iOS 15.0 or later on the following devices: iPhone 11 Pro, X, Xs, SE, iPhone 8, 7, 6, iPad Pro and iPad Mini.

Click the button or scan the QR code below to download the latest version of MusicBox: Save Music for Later on iOS.

MusicBox: Save Music for Later Screenshots 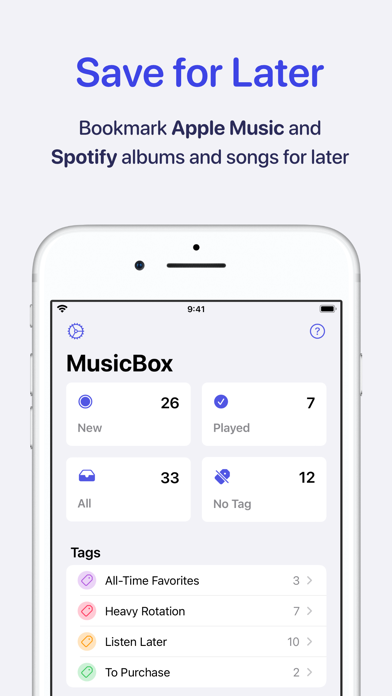 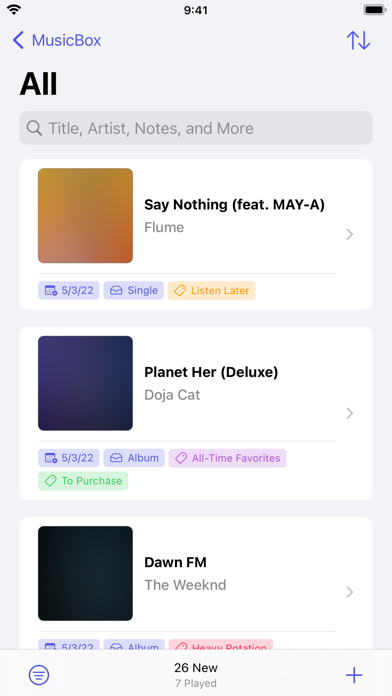 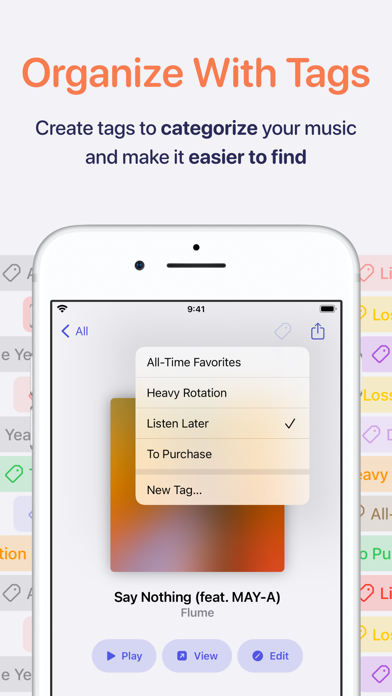 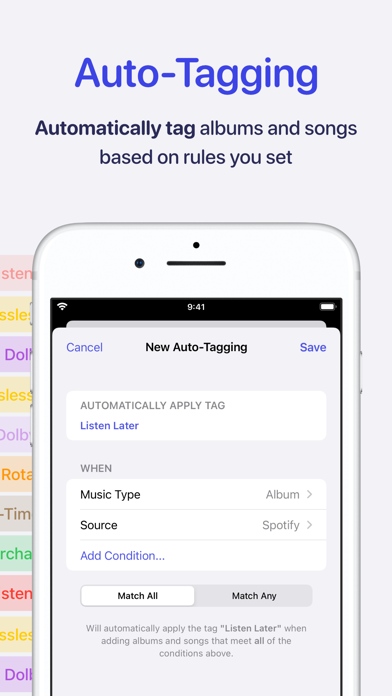 Review: Great idea, responsive developer This is a great idea for an app, and the developer has been incredibly responsive to suggestions to support different...

Review: Very Handy!! Very handy and user friendly! Hoping this will integrate with MusicHarbor in the near future!

MusicBox: Save Music for Later Add-Ons

Create New Price Alert for MusicBox: Save Music for Later