26 years after the iconic film, you can now play the Jumanji board game, based on the 1995 classic, on mobile! It’s casual co-op fun for up to 4 players.
ABOUT THE GAME
A game for those who seek to find a way to leave their world behind… experience the Jumanji board game based on the 1995 film. The game combines the classic board game with exciting time attack, card matching mechanics. Roll the dice and read the riddle! Every round is a race against time to banish the danger as a team and reach the centre of the board. In the face of crocodiles, elephants and rhinos, rescue your friends from creeping vines and dodge the hunter, Van Pelt.

Test your skills
• The Jumanji board game contains a mysterious jungle. With every roll of the dice dangers escape into the town and can only be stopped by finishing the game. Be careful, if the jungle overpowers you and your team - everyone loses
• ROLL THE DICE TO MOVE YOUR TOKEN - DOUBLES GETS ANOTHER TURN - REACH THE CENTER TO WIN…
• ADVENTURERS BEWARE: DO NOT BEGIN UNLESS YOU INTEND TO FINISH… Stand together and face the creatures and plants the Jumanji riddle summons into the world
• Cycle through your deck and match the items to the danger to banish them back into the board.
- Use the items wisely and rescue your friends from jungle vines, and protect yourself with the magical shield.
• Manage token magic - your token will charge whenever you use a magical flask. When it’s fully charged you can use it against any danger, or banish Van Pelt in a single move.
• Use bonus items: add valuable seconds to your fight, and team-up points when you help a friend escape vines or gift magical objects. It takes working together to get a Team-Up All-Out Attack!
• Collect gems as you travel around the board and choose magical abilities, including extra Team-Up points when helping friends, reduced damage from Van Pelt’s attacks, and the ability to deal extra damage when battling vines!

Cooperate in real-time
Your team will face more than one threat in every round. While you battle jungle creatures, twisting vines will try to ensnare you and your friends, and you must help each other to escape. Watch out for the hunter, Van Pelt, you’ll also need to dodge his attacks!

Team up
One of you must reach the center of the board to win the game, and it takes teamwork to get that far. Do you have fewer players? AI companions will join to complete your team.

Anyone can play
It’s so quick and easy to pick up, anyone can play! Join your friends for co-op fun online, gather around the digital board anywhere, anytime, and start your cursed adventure.

FEATURES
• SIX different characters to choose from
• SEVEN dangers ready to stop you from finishing the game
• FIVE locations you must defend - if you lose them all, you lose the game
• A choice of player tokens, each connected to the mysterious heart of Jumanji
• An original soundtrack by award-winning film composer, Christopher Willis

• AVAILABLE NOW - 3 exclusive tokens: the Hippo, Snake and Zebra.
• COMING SOON - Play Jumanji on 6 new Maps. Each will include 5 new locations, 2 new characters, 2 new tokens, and a new danger to defeat!
• COMING SOON - The first new Map, Winter Lodge, will be an icy departure from the sunny town of Brantford, and the Jumanji jungle will not be put off by the cold!
• COMING SOON - DLC Expansions: JUMANJI: Welcome to the Jungle and JUMANJI: The Next Level.

Need help? Use our JUMANJI: The Curse Returns Walkthrough page or sign up and make your contribution today.

JUMANJI: The Curse Returns is here! After 26 years, you can play the Jumanji board game, based on the 1995 classic, on mobile! Jump into a fun, casual co-op multiplayer adventure for 4 players, including: - A combination of classic board game and time attack, card matching gameplay - The classic riddles, creatures and plants from the 1995 film - Six different characters to choose from - Seven dangers ready to stop you from finishing the game - Five classic locations from the town of Brantford - if you lose them all, you lose the game - A choice of player tokens, each connected to the mysterious heart of Jumanji - An original soundtrack by award-winning film composer, Christopher Willis One of you must reach the center of the board to win the game, and it will take the whole team to get that far. If you have fewer than 4 players, AI companions will join to complete your team. Play now and venture into a world you’ll never forget!

About JUMANJI: The Curse Returns

JUMANJI: The Curse Returns is a board game developed by Marmalade Game Studio, and is available for download on both iOS and Android devices. The app is compatible with iOS 11.0 or later on the following devices: iPhone 11 Pro, X, Xs, SE, iPhone 8, 7, 6, iPad Pro and iPad Mini.

Click the button or scan the QR code below to download the latest version of JUMANJI: The Curse Returns on iOS. 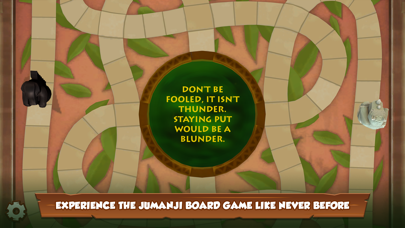 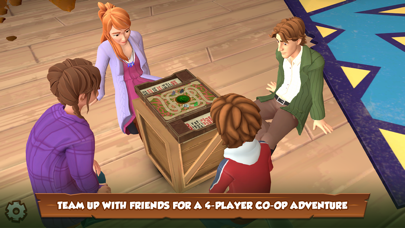 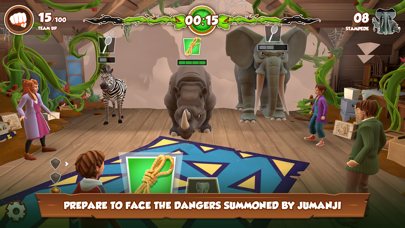