The Murdered by Midnight board game can now be enjoyed anywhere on the go. Either play with friends or anyone around the world. Be the first to deduce the murderer, murder weapon, motive and time of death to solve the murder and win the game!
The story takes place in the 1920’s in a fabulous Art Deco mansion, Briarwood Manor. The owners have gathered six world famous detectives and several of their friends and family to throw a “murder party”, where they’ll stage a mock murder for the detectives to solve as entertainment… as was all the rage in the 20’s.

Unfortunately, things get all too real when someone commits an actual murder before the party gets started. Can you follow the clues and bring the guilty to justice before time runs out?

HIGHLY REPLAYABLE - Not including the detectives, there are 25 people at the manor during the time of the murder, this includes staff, family members and friends. Considering that the person who found the body is not the murderer, there are 22 possible suspects for the crime. With all of the combinations of people, weapons, motives and times, there are more than 483,000 possible outcomes just waiting to be explored!

EASY TO PLAY, HARD TO MASTER - During a turn each player can: move to a new location, search for weapons, dust for prints, perform forensics analysis or ask a witness what they saw or who they suspect. Using these clues, the player can deduce the murderer, murder weapon, motive and time of death.

SINGLE & MULTIPLAYER - Play either by yourself or with friends and family over Game Center. Enter an open match to play with anyone in the world! Multiple matches can be open at any given time.

ACHIEVEMENTS AND SCOREBOARD - Multiplayer games feature a number of Achievements that can be won to keep gameplay exciting and fun. Compare your wins with your friends and family on the master scoreboard.

RICH AND IMMERSIVE ENVIRONMENTS - Murdered by Midnight features beautiful, period-specific graphics and fonts designed to invoke the Art Deco feel and draw the player into the game’s environment.

INTERESTING CHARACTERS - Each non-player character includes a unique portrait and mini biography to help tell the story and make the player’s feel like they are staring in their own murder mystery novel.

MULTIPLE RESPONSES - Murdered by Midnight features multiple responses for each character based on the current scenario. This provides a rich and immersive story that helps to draw you into the game and keeps things from getting boring and repetitive.

Need help? Use our Murdered by Midnight Walkthrough page or sign up and make your contribution today.

About Murdered by Midnight

Murdered by Midnight is a board game developed by Appracatappra, LLC, and is available for download on both iOS and Android devices. The app is compatible with iOS 15.0 or later on the following devices: iPhone 11 Pro, X, Xs, SE, iPhone 8, 7, 6, iPad Pro and iPad Mini. 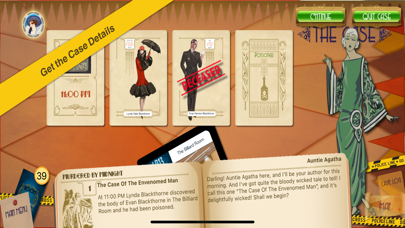 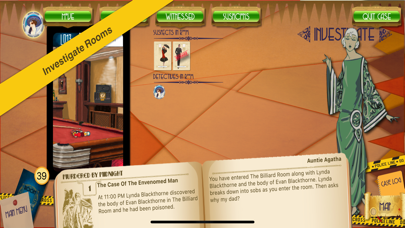 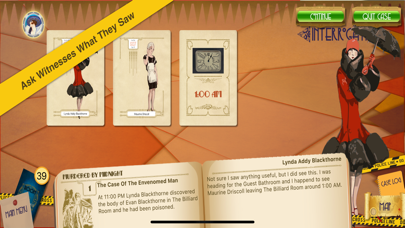 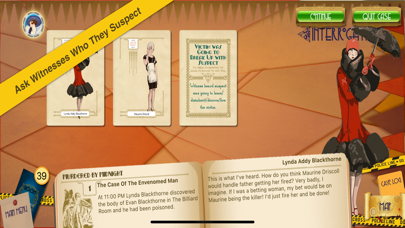