HOW TO PLAY
Stick Warriors has the most basic control ever! you just need to dodge, jump, power your ki, become ultra instinct and Z warriors super Hero fight against invaders. Use ultimate power, ultra shooting ball skill will be kill all invaders in shadow.

FEATURES
- 4 Game modes: Versus mode, Story mode, Tournament mode and Training mode
- Versus mode: Face your favorite opponent head-on in an one-on-one battle. The winner will be decided after 3 rounds.
- Story mode: Go on a life-long adventure to discover your true strength. Travel to all corners of the world and scream your battle cry. Become the hero as you mean to be.
- Tournament: 16 finest warriors were chosen to fight in the tournament. Defeat any person may come in your way to reach the ultimate glory as the new champion.
- Training mode: Prepare yourself for a new journey. Here, you can practice fighting skills and try out new characters. There's no limit on time so you can fight with the dummy as long as you want.
- 46 stickman fighter characters SSJ with unique fight dbz styles.
- Upgrade and unlock over 46 unique special moves for each fighter.
- Stick Hero Fighter super saiyan has the most basic control ever!
- Ultra instinct characters.
- Easy and Simple to play.
- Cool transform Saiyanz.
- Collect these kinds of super fighters: dragon ssj2, z ssj3, ssj4, ultra instinct (ui), xeno... to become strongest stickman warrior.

Download Stickman Warriors - Super Dragon Shadow Fight game for free and Protect your Earth and Universe from the big villains now. Control your heroes to destroy all enemies, all villains.
Keep in touch with us if you like our game and do not forget to comment about Stickman Fighting game. We would love to hear from you!

Need help? Use our Stickman Warriors Fight Walkthrough page or sign up and make your contribution today.

- Update for iOS 14 - Optimize game performance Our development team is continually improving the game to deliver the best mobile entertainment. Thank you for playing and we hope you continue to support future updates of Stickman Warriors Fight - Super Dragon Shadow Fight.

Stickman Warriors Fight is a free-to-play, action and adventure game developed by Doan Thanh, and is available for download on both iOS and Android devices. The app is compatible with iOS 10.0 or later on the following devices: iPhone 11 Pro, X, Xs, SE, iPhone 8, 7, 6, iPad Pro and iPad Mini.

Click the button or scan the QR code below to download the latest version of Stickman Warriors Fight on iOS. 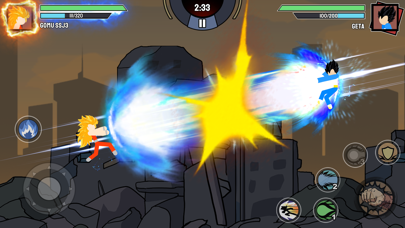 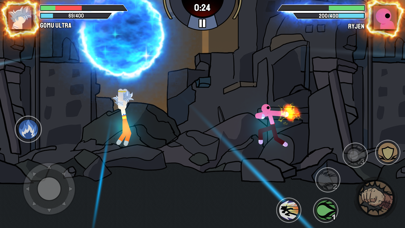 Review: So fun but cloud do with some tweaks So I found the game when I played it it was so fun but each level had one ad at...

Review: It’s really fun You should just add more characters overall the game is good and some of the bosses are too powerful to...

Review: Dear creators I think this is the best mobile game I have ever played in my entire life probably THE best game...

Review: Alright Overall this game is really fun but in the PvP it’s unfair because my opponent can hit multiple combo...