Enjoy the excellent Killer Sudoku puzzle game for both beginners and advanced Sudoku lovers! Download and start the daily challenge now!
Thousands of killer sudoku puzzles here for you to solve. Come to play this new killer sudoku game, and train your brain. Have fun!

[New] Dark Theme is available now! Perfect for you to play Killer Sudoku before bed.

Killer Sudoku is a logical puzzle number game & brain game. To complete a puzzle, like the classic sudoku game, you can fill the grid with numbers; unlike the classic sudoku puzzle, you have to make sure that the sum of numbers in each cage (areas surrounded by the dotted lines) is equal to the number in the upper left corner of the cage.

If you are interested in playing number games or math puzzle games, this Killer Sudoku is exactly for you! If you'd ever played number games, such as Sumdoku, Addoku or Cross sum, come to try this one, too! It is an amazing combination of a sudoku puzzle, a KenKen and a Kakuro puzzle game.

Killer Sudoku may be a little bit harder than a classic sudoku puzzle game, no worries! We offer several balanced difficulty levels for beginners and advanced players! The game has the function to add or remove notes during gameplay. Did you make a mistake at the beginning? No worries, there are undo and hint functions! Get it back fast!

1. Place numbers 1-9 into each grid cell exactly like in a classic Sudoku puzzle;
2. Different cages - groups of grid cells indicated by dotted lines;
3. The sum of all numbers in each cage should be equal to the number in the upper left corner;
4. The sum of all numbers of each 3x3 block, row, or column always equals 45;
5. Each cage, row, column, or 3x3 block cannot have the repeated numbers.

- Turn on the note mode to take notes like solving puzzles on a piece of paper. The memo is automatically updated while you fill in the cell.
- Find your mistakes and challenge yourself or use auto-check to see your mistakes in real-time.
- Complete daily challenges and earn special trophies!
- Use free hints when you are stuck.
- Thousands of killer sudoku puzzle games

- Statistics. Track your killer sudoku progress.
- Unlimited Undo. One tap to remove the mistake.
- Autosave. If you leave Sudoku incomplete, it will be saved. Keep playing anytime.
- Eraser. Eliminate all of the mistakes if you made any.
- Sharing functions. You can share this sudoku game with your friends via Facebook, Twitter, etc.
- Four perfectly balanced difficulty levels: Easy, Medium, Hard, and Expert.

Train your brain anytime and anywhere and keep your mind sharp in this Killer Sudoku puzzle game. With its easy control, intuitive interface, and perfect selection of different levels, this killer sudoku app will help you to enhance your logical ability and learn more Sudoku skills. Come and try it out! Challenge yourself how quickly you can solve problems and improve your memory!

We always carefully check all reviews. Please feel free to leave your ideas, feedback, suggestions, or any questions about Killer Sudoku for further improvements! We are always here for you. Thank you and have fun with Killer Sudoku, Sudoku Puzzle!

Need help? Use our Killer Sudoku Walkthrough page or sign up and make your contribution today.

Killer Sudoku - Puzzle Games is a free-to-play, puzzle and board game developed by Guru Smart Holding Limited, and is available for download on both iOS and Android devices. The app is compatible with iOS 11.0 or later on the following devices: iPhone 11 Pro, X, Xs, SE, iPhone 8, 7, 6, iPad Pro and iPad Mini.

Click the button or scan the QR code below to download the latest version of Killer Sudoku on iOS. 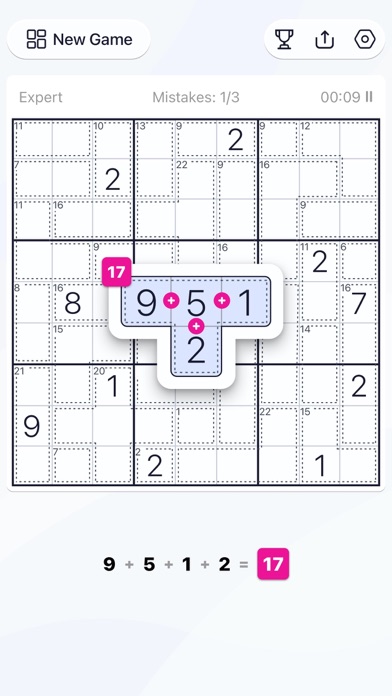 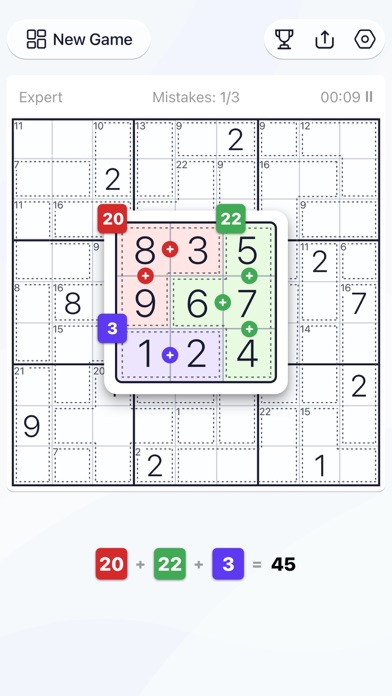 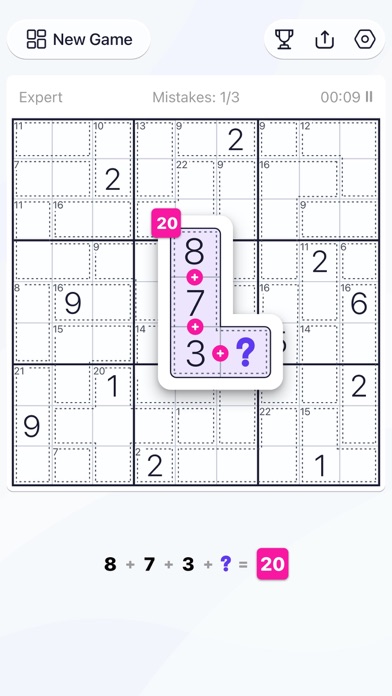 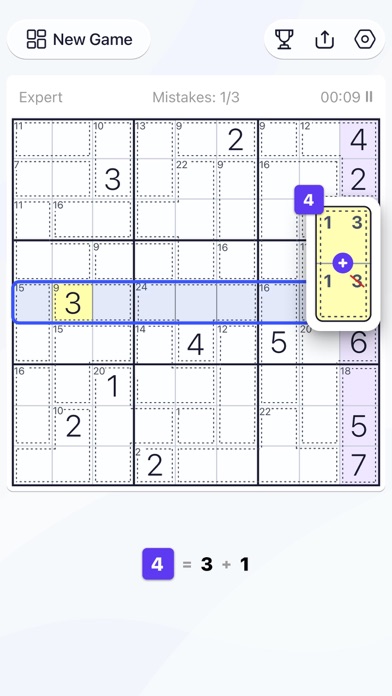 Review: Too many ads They have increased the amount of ads. Hate that.

Review: You can’t save The game overall is good but you can’t save your spot so if you exit the app for more...

Review: Too easy I’m very inexperienced at Sudoku and I became able to solve the Expert level with no hints after owning...

Review: Progress lost Love the game but one of the advertisements locks up my screen. When I exit and restart the game all...

Review: Considering upgrade I was considering an upgrade, but is the cost one time, monthly or yearly?