Welcome to the Official State Domino game of Texas! Texas 42 is a trick taking game similar to bridge or spades. Invented in the late 1880s, it has become a tradition across generations of players.
The sole motivator for the development of this app has been to create an AI that doesn't make the users wish they spent their 2 dollars on a soda instead of frustrating computer play. Much work has been made into creating an AI that makes the same moves you would. Since you don't have the same play style as everyone else, you can set each computer player to have one of 3 specified play styles "Conservative", "Normal", or "Aggressive". You can mix and match these styles as you see fit and can change them at any time in the game.

A conservative player will tend to bid lower than the rest of the players. Its main focus when it has the lead is to draw all the trumps in play before moving on to non-trumps. If the conservative player does not have the highest trump, it will tend to lead with a junk/punt tile to draw out the higher ones, while holding on to tiles with count until it knows it can win with them.

A normal player will tend to bid higher than a conservative player. Its main focus is holding on to its trumps for cases where count is on the table. If it does not have the highest trump it will tend to attempt to punt to its teammate.

An aggressive player is a mixture of the two. It tends to push the bid to 31 or 34-36 with weaker hands than the other two and is more willing to bid marks if it has a strong hand. It is also willing to lay down trumps with 5 counts in an effort to draw out the ones covering the 10 count. Its more willing to play count at risk of hoping its partner will win the trick.

For bidding purposes, your partner will respond to your bid. If you bid 30, you are indicating to your partner that you have a helping hand and it will be much more likely to outbid an opponent win the bid.

"The AI has been impressive for me so far, not a single play that I've seen has been stupid yet and I've probably played around 10 games. Very solid game for my experience"

"I really like your idea of the different styles of play and I think you are pretty close to that reality."

"To date it is the best one out there. I have never felt like I was playing true 42 on the other apps."

Need help? Use our Texas 42 Walkthrough page or sign up and make your contribution today.

More multiplayer tweaks. Should be the last one needed for a while.

Texas 42 is a card game developed by MaroonEntertainment, and is available for download on both iOS and Android devices. The app is compatible with iOS 10.0 or later on the following devices: iPhone 11 Pro, X, Xs, SE, iPhone 8, 7, 6, iPad Pro and iPad Mini. 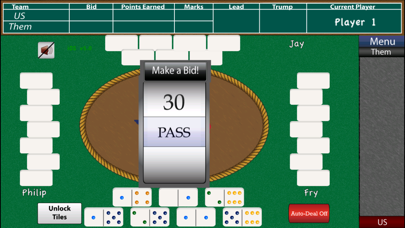 Review: Bugs Love 42, and if they could get the multiplayer bugs worked out it would be great....

Review: Good game Needs some work in multiplayer. Love the game, but can’t finish with an invited player. Please fix!

Review: Works well for a learning single player My son is teaching me how to play, and this app is great for single player and being able to...

Review: Problems My husband and I have the same type of phone but he can splash and plunge whereas my app won’...

Review: 'Opinions' 'First I do like this game, but I agree with some of the others, the AI’s don’t play...