Experience a bold new imagining of the Marvel Universe and uncover the secrets of the mysterious new planet known only as Battleworld.
Long ago, Maestro, an evil version of the Hulk from an alternate future, forced shattered realities together to construct his own Battleworld. He ruled over these merged, alternate timelines until he was secretly slain! With his iron grip no longer holding this world together, it has descended even deeper into disarray. Barons have risen to control their lands, looking to turn the tide of war in their favor. As this Secret War begins, it is up to YOU to solve the mysteries of Battleworld and take your true place as a powerful Champion!

Customize your ultimate Marvel Champion with weapons and gear, then team up with your network of friends in real-time high-action brawls. Play your part in an epic war of planetary proportions as you rise from a rookie Champion to become a legendary hero of BATTLEWORLD!

YOUR CHAMPION. YOUR WAY.

*Customize - The only Marvel game where you can become your favorite Champion and customize them to reflect your personality and battle style.

*Enhance - Earn gear and upgrades as you brawl through the mayhem. Gear and weapons will add to your Champions’ abilities and strength. The more powerful your Champion becomes, the more successful you will be!

*Play the Perfect Role - Tank with your Hulk and soak up hits while you attack hard with area disruption. Bring your Black Panther to inflict devastating damage at close range. Use high-powered ranged attacks with your Web Warrior and Iron Legionnaire. Amplify your allies with your Storm and Sorcerer Supreme and deal bursts of damage to vanquish groups of foes.

*A New Marvel Universe - Marvel authenticity with a twist! Experience the deep story of Battleworld, full of mystery, intrigue, and ferocious battles with characters from across Marvel history.

Strategize with your team to select the right mix of Champions to dominate over the competition in action-packed team battles!

*Deathmatch - A wild 2v2v2 battle for supremacy, gain points by vanquishing your foes in battle. Use epic power-ups to upgrade your Champion’s abilities and lead your team to victory!

*Stronghold - Team up and battle waves of enemies to protect your ISO Core. The difficulty increases as you progress, along with your rewards!

*Onslaught - A rotating Strike mode, fight off 15 waves of increasingly difficult enemies that bear down on you and your teammates.

YOUR TEAM. YOUR ALLIANCE.

Join an Alliance or create your own to forge a community of Champions ready to tackle Battleworld’s challenges! Whether you are looking to round out your Arena Conquest team or the key to your perfect Stronghold defense, Alliances are the best way to find your next teammate.

MAKE MARVEL YOURS! Your Champion. Your Team. Your Realm.

Join the intense, team-based multiplayer action and put your Champion to the test in action-packed brawls where skill and strategy will earn you a place among LEGENDS!

TERMS OF SERVICE:
Please read this Terms of Service Agreement and our Privacy Notice before using our services as they govern the relationship between you and Kabam.
www.kabam.com/terms-of-service/
www.kabam.com/privacy-notice/

Need help? Use our MARVEL Realm of Champions Walkthrough page or sign up and make your contribution today.

NOW AVAILABLE WORLDWIDE! NEW STORY EVENT: TIME OUT OF MIND The Patriot Garrison emerges from being frozen in time by the Maestro and are convinced by Stark Prime to officially enter the fray, but President Peggy Carter immediately finds that adjusting to the new status quo will not be easy. At the same time, a Scarlet Witch from the Temple of Vishanti begins to ask questions about the Ancient One’s true nature. Follow along with the new TIME OUT OF MIND story with weekly Onslaught Strikes featuring all new entries into the CODEX CONTINUUM and MORE! NEW FEATURES: Login Calendar Get rewards every day just for logging in! You can earn special prizes over your first 7 days, with different calendars available at different times of the year. To celebrate the holidays, you can also earn Units, Free Crates, Free Crystals, and more from the Holiday Calendar! Uncommon Gear Synergies Uncommon Gear will now have a 20% chance to generate with one of three new uncommon gear synergies, these synergies are shared across our three Champion Roles (Tank, Support, & Attack). These will provide you with even more build options, and will allow you to customer your playstyle earlier in Tier 2! New Synergy Sets Battleworld Bastion Set, Realm Reaver Set and Cunning Calculation Set. Alliances You can now create or join an Alliance, making it easier to party with other players and expand your social circle in Battleworld. NEW CHAMPION & WEAPONS: Super Soldier: Play as the Champion of Patriot Garrison and defeat anyone opposed to freedom and justice! Vibranium Shield - The classics just keep bouncing back, and so will this shield if you know how to throw it properly. Arc Shield - A strong shield, a powerful soldier, and a flash of tech make this a weapon and a wall of defense. NEW GEAR: Scarlet Witch Set Unlock an exclusive new Scarlet Witch set for Sorcerer Supreme! Retro-Inspired Gear Pieces All other champions are each receiving a new retro inspired gear piece to add to your collection. BUG FIXES AND IMPROVEMENTS Champion Improvements: - All Champions: Updated base attributes so that all Champions have 200 PI at default. - Black Panther: Claws & Spear: Adjusting Black Panther's Power Types allows her to gain additional value from a more diverse set of attributes and help keep the burst damage of her Kinetic Shield a bit more reasonable. - Black Panther: Special 1 - Kinetic Shield: Adjusted Power Type for area of effect Damage; Now uses Special Power. - Web Warrior: Web Shooter & Gatling Shooter: Minor updates to base attributes. Improvements to boost the overall strength of Web Warrior's Specials to allow him to be less reliant on Light Attacks to deal significant Damage. Improved Special power from 165 to 185 and reduced attack Power from 150 to 130. Synergy Improvements: - Black Panther: Vibranium Burst Set: “Residual Kinetics” - Reduced Shield on Dash strength. - Black Panther: Thrill of the Hunt Set: "Crimson Clarity" - Fixed an issue with the Bleed chance being significantly lower than expected. - Web Warrior: Web-snipe Wonder Set: Fixed an issue with the bonuses for "I'm Over Here!" and "Pick'Em Off.” - Storm: Winds of Vitality Set: "Invigorating Gale" - Fixed an issue that displayed the incorrect value in the description. Bug Fixes: - Fixed an issue where objectives were not claimable with exact values. - Fixed an issue where Sorcerer Supreme’s Special 1 VFX could break. - Fixed an issue where the Feral Hulk Tattoo would not display on Hulk’s model. - Numerous crash and stability improvements All this and more! Check out the full list of exciting updates on the MROC subreddit: https://www.reddit.com/r/MarvelRealm/

About MARVEL Realm of Champions

MARVEL Realm of Champions is a free-to-play action game developed by Kabam Games, Inc, and is available for download on both iOS and Android devices. The app is compatible with iOS 13.0 or later on the following devices: iPhone 11 Pro, X, Xs, SE, iPhone 8, 7, 6, iPad Pro and iPad Mini. 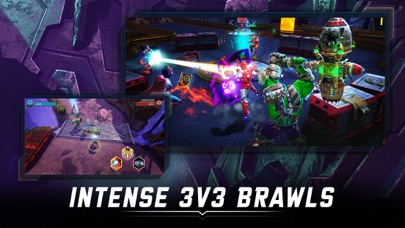 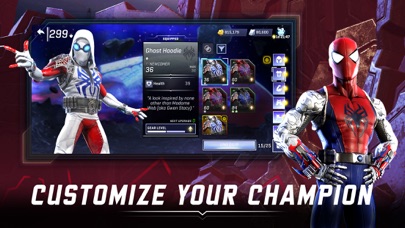 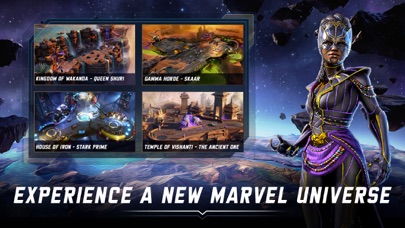 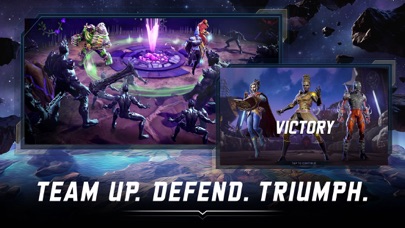 Review: Good but p2w I’ve been playing this game for a while and have gotten pretty good, but I noticed that it is...

Review: Best game ever🤩 First off this game is the best ever because of its champions I mean like they have so much cool...

Review: I wouldn’t say I love it Don’t get me wrong it’s loads of fun, but here are my main issues with it: 1. It can...

Review: Not like I had hoped..... I seen another kabam made marvel game and got real excited...... The game is pvp... Just pvp. Unfortunately it seems...

Review: Soooooo gooood!!!! Yo I love the concept that you start off with some great superheroes like...Ironman,hulk,dr stranges wife and...