Boxing Manager lets you develop an unknown group of fighters and gym and scale the heights of world championship Boxing, anytime and anywhere.

Across the traditional weight divisions from Heavyweight to Flyweight and with fighters from across the world of boxing, can you write your name into the history books as one of the top boxing minds of the age?

Building gyms, hiring trainers, signing the right fighters, finding the right opponent for them, setting the right training plan, to managing their corner and strategy on fight night, the next page of boxing history is yours to turn.

Working exclusively on iPhone on iOS, you can get the most detailed and authentic, yet quick-playing boxing management game ever created.

PLAY IN A MASSIVE FIGHTER UNIVERSE
With over 3,000 unique boxers in every game world, managers have the pick of a vast range of fighters of different weights, nationalities and abilities.

FIGHT VIEW
Be in the corner for your stable fighter’s bouts. Can you use the time between rounds to make the difference between winning and losing and provide your guy with the right instructions.


FIGHTER GROWTH
As your fighters win they acquire experience to convert into attribute improvements. Now shape the direction of your fighter’s career in ever closer details.

TRAINING
Take even greater control of your fighter than in previous versions by configuring custom training plans as they attempt to climb the ratings.

STABLE AND FIGHTER STRATEGIES
Control the size and shape of your stable and gym. Find the right opponents for each of your fighters.

INTUITIVE USER INTERFACE
Designed uniquely for iPhone, we are constantly fine tuning the experience to make the most usable boxing manager game ever created.

IN GAME NEWS AND INTRAY
Stay abreast with both your stable and fighter news as well as the ups and downs in the Boxing Manager game world with the in-game news system. Whether there’s a big heavyweight title fight been made, or one of your fighters wants you to arrange their next fight our in-game, the news system keeps you up to date.

MATCHMAKER
Using the unique Matchmaker function, plot a course for your fighters from the bottom of the rankings all the way through to the world title.

CONTRACT NEGOTIATION
Build your reputation and approach any of the fighters in the game with custom contract negotiation and our in-game fighter contract trading system. Sign your fighters at the right price and watch your profits grow as you develop their ranking and box office appeal.

MONTHLY RANKINGS
See where your fighters stand and what it will take to climb through the three world rankings and five regional rankings.

Need help? Use our Boxing Manager Walkthrough page or sign up and make your contribution today.

It's another MASSIVE game update for Boxing Manager players! We've now a FOURTH world title organisation to the game. You can also now extend the game to all 16 weights, a further 72 titles and over double the number of fighters in the standard game world. Fourth World Title and Rankings are here as our game world gets ever deeper and realistic. Eight new World Titles to fight for. (details of game world extension below) Double the number of title permutations. The biggest Undisputed title challenge is here with fourth belts needed to make it to the very top of the game We continue to lead the way in creating what is by far and away the biggest, most realistic and most critically-acclaimed Boxing game world ever seen. This update also includes :- Updated Pound for Pound rankings so that titles are not so OP in determining P4P rankings New game start date changed to January 2021 Added ranking criteria to fighter contracts. Fighters now have an expectation of their career progression and will be less inclined to renegotiate contracts until previous contractual ranking expectations are met. Career earnings now shown for all fighters on Career Record screen. (note: this does not record earnings retrospectively and thus only earnings after the update are shown) As requested by many, players can now boost fighter growth and development using additional XP through an IAP. Be warned this "burns" through a fighter's potential very quickly. All new games now start with a maximum of four fighters. This reduces the All weights maximum in order to create better game play and stable development.

Boxing Manager is a simulation game developed by Sport and Financial Limited, and is available for download on both iOS and Android devices. The app is compatible with iOS 12.1 or later on the following devices: iPhone 11 Pro, X, Xs, SE, iPhone 8, 7, 6, iPad Pro and iPad Mini. 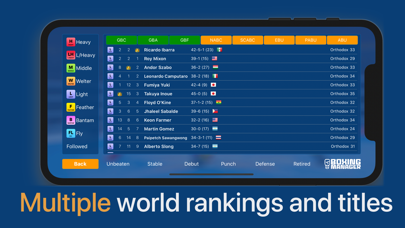 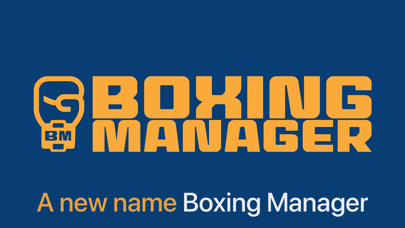 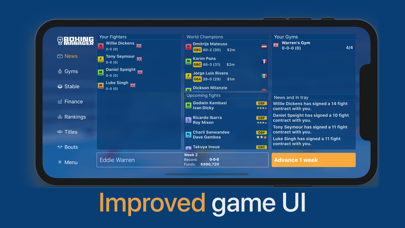 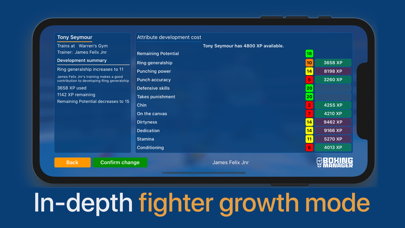 Review: Great game Love the game and many different features. Not many other games like it on the mobile. Would love something very...

Review: Great game but… So I got the expansion pack but the option to buy it won’t go away. Another problem is that...

Review: Idk Idk man it’s good but idk how the training works idk if my character improves or not man and...

Review: CUSTOM I LOVE THE GAME BUT CAN YOU ADD WHERE I CAN MAKE LITERALLY CUSTOMIZE MY OWN CHARACTER