Trek73 is a "text based" computer space-battle simulation based on the original Star Trek television series. It was written in 1973 in the BASIC programming language and played on a Teletype connected to a HP 2000 computer. Trek73 was unique in its day because it was more than just a board game with a computer player. It involved the calculation of the trajectories of the virtual ships and projectiles with enemy ships controlled by a relatively sophisticated AI. The addition of dialog and situations from the original Star Trek series made this game a favorite of early players and future programmers. It had a long-lasting influence and was revised and re-coded through the 1980s and 90s and it can still be played today in a number of forms.
Now this classic game, in all of its command-line glory, is available to play on your iPhone!

Don't be fooled into thinking this game is easy-- in fact-- it is quite difficult to master. The "help" button, in the game, links to a a website with extensive information about the game as well as how to play help.

Some hints are: The "help" button will link to a website that has information, help and strategy for the game. "32" is the command that lists all the commands, and when you are referring to a ship or name, you only have to enter the first letter.

Need help? Use our Trek73 Walkthrough page or sign up and make your contribution today.

Trek73 is a strategy game developed by Dennis Nederlof, and is available for download on both iOS and Android devices. The app is compatible with iOS 12.0 or later on the following devices: iPhone 11 Pro, X, Xs, SE, iPhone 8, 7, 6, iPad Pro and iPad Mini. 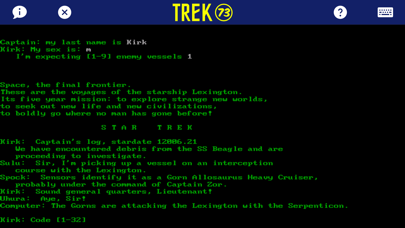 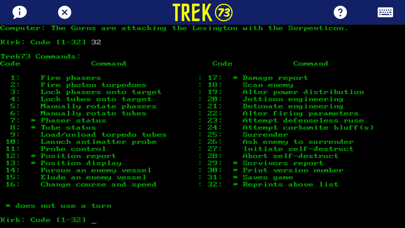 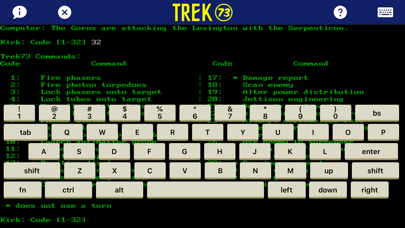