Support for the TR Comeback Challenge event is this weeks special! Make some noise for Tony! This week we will not only cheer for sports but also for this amazing event!
"MyApplause" brings the atmosphere back to football – from you and other fans per smartphone or tablet. Fire up and cheer your team and players on from home during live games – reconnect with other fans and your team.

"MyApplause" is the app for every football enthusiast who wants to bring the feeling of heaving stands back into the stadium. Now with new fan songs just for your team!

It’s simple: choose the match you want to watch and your team, fans activate different crowd sounds (cheer, applause, sing, whistle) and the app plays those effects through all connected devices. The more the fans click or shake their smartphones - the louder it becomes, in addition, the effects can also be broadcast over TV or live stream. In the future, the effects should also be able to be played through the speaker-systems in the stadiums.

Every app user hears the effects, as though they were sitting in the stadium themselves – connect to your Bluetooth speakers for even better sound.

"MyApplause" can’t provide beer – but it can provide atmosphere.

In the future the effects from "MyApplause" should be able to be heard by the players on the field, and alternatively by the viewers at home. In the app you can hear and see how many other fans are pushing which buttons and automatic mixing of effects within the app ensures an all-round balanced sound.

Support for the TR Comeback Challenge event is this weeks special! Cheer for Tony!

MyApplause is an application developed by WMP GmbH and released on iOS. The app is compatible with iOS 9.0 or later on the following devices: iPhone 11 Pro, X, Xs, SE, iPhone 8, 7, 6, iPad Pro and iPad Mini. 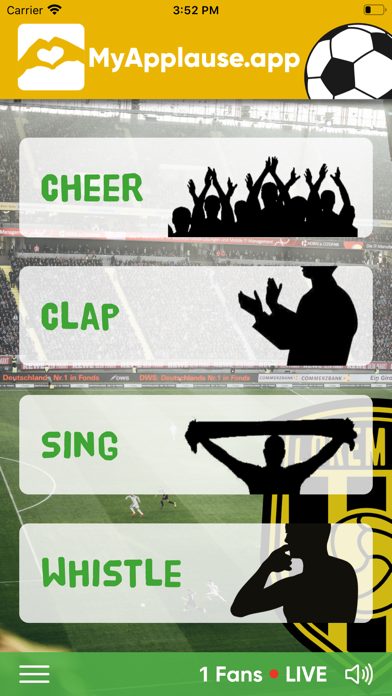 Review: 'Suggestion' 'Please move the thins icons to the bottom on TR experience. Too easy to touch them, including thumb down when “...