Design your own flight map

Step into the world of airline route planning, where your goal is to create a flight network to guide passengers to their destinations in a limited amount of time. You get to call the shots on which routes to draw and which cities to designate as hubs that best serve each scenario. The flight maps you design will also need to be efficient and flexible to accommodate for events that may occur, like airport rushes and closures, as its effects ripple throughout your network. With over 100 geographically and historically themed levels to play, each map you make will be put to the test.
MAIN FEATURES
- Take a step back in time and create flight maps for past historical scenarios, like the 1849 California Gold Rush and the 2012 London Olympic Games
- Prepare for the future and create flight maps in realistic inclement weather simulation, including Hurricanes and Blizzards
- Understand the present and create flight maps using actual cities, like New York City and Tokyo, to reflect real flight patterns

OTHER FEATURES
- Play 100+ levels across multiple maps like America, Europe, and Asia
- Analyze in-game statistics to help fine-tune your flight map
- Speed up or slow down the game to your comfort
- Compete for the top spot on worldwide leaderboards
- Simplistic interface and experience
- No ads

Need help? Use our OptiFlight Walkthrough page or sign up and make your contribution today.

OptiFlight is a free-to-play, strategy and simulation game developed by Krish Suchdev, and is available for download on both iOS and Android devices. The app is compatible with iOS 12.0 or later on the following devices: iPhone 11 Pro, X, Xs, SE, iPhone 8, 7, 6, iPad Pro and iPad Mini. 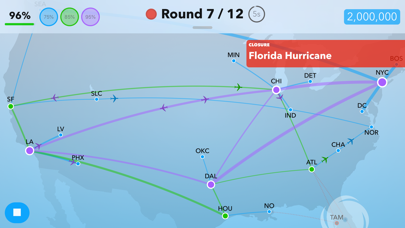 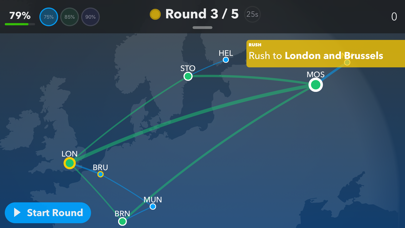 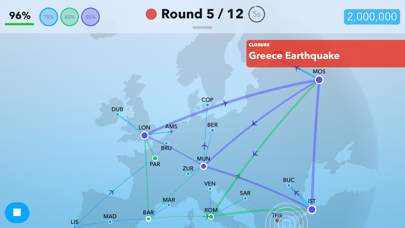 Review: I’m giving 5 stars but While I do truly love the game one thing that always bothered me about was the the timer , when it...

By I an the Nickname

Review: Ok game but it gets rather complicated Had fun on several levels, but the game needs more guides on how to optimize on later levels. Halfway through...

Review: Loved It - And Slightly Addicting This game is really fun. I’ve played for about an hour nonstop already after downloading. I don’t have...

Review: Not ready for prime time I like this game but it has serious bugs/flaws, most notably in how it handles fixed/unchangeable routes. One...

Review: 'Excellent Game' 'This is an excellent game that is a great balance of strategy and problem-solving. It’s challenges change from round...