In the tremendous universe, the aliens are brought into the world after the enormous detonation. The skirmish of presence happens everywhere throughout the galaxy. In obscurity universe, self-shining aliens are assaulting humans that overwhelm the universe. Tower Defense Future Post Galaxy is the battle against the attack of those sparkling aliens. These aliens utilize characteristic light and use the information to move in the space.There are different types of enemies with different destructive powers in this classic defense games. You have to choose your best hero to deal with them. Kill all the enemies to protect your home and island from Invasion in this classic defense games. You can use a different type of weapons to finish the enemy army in turret defence game. You could shop the destructive weapons to finish the sets of different types of armies in free tower defense game. Their different sets of weapons such as machine gun, ice bunker, Flame squad , rocket gun, tesla mech, snipers etc which can be chosen at different levels to protect tower defends offline.
Get the benefits to play with multiplayer at 3rd level. You can play with payers of your choice from a different part of the world online. Don't miss the chance to get unite with your friends in this most advanced and exciting classic defense game of this year. Don't forget to share your score and game progress with your friends on facebook and get thousands of coins at free of cost. These can be used to buy all the coins present in the free tower defense. With these deadly weapons , you can finish the whole sets of the enemy and protect your tower defends from getting invaded by the aliens in tower defense offline.
Overwhelming battles seethes on earth against approaching outsider ships, the free tower defense units are to keep the development of extra land bases for the outsider boats in classic defense games. Be a piece of this amazing game, what's more in infinite realm, battle against the barging in species and spare our planet earth tower defense offline.
Enjoy yourself with the wonderful graphics and the wonderful sound of Strategy:
- You will fight with lots of enemies at a time in free tower defense.
- There are two modes available Normal and Hard, so play with your best skills to kill the enemies with tower deff.
- There is a huge kit of weapons to choose such as machine gun, ice bunker, Flame squad, rocket gun, tesla mech, snipers.
- You can share the highlights on the facebook and earn coins to upgrade the weapons.
- There are multiple perks in the game such as ice etc which can slows down the enemies with ease in turret defence.
- To collect resources to buy and upgrade your weapons in this amazing turret defence game
Your main goal is to protect our island from the dictator's army which wants to invade your island take control of your tower defends. You have to kill all the invading aliens which coming toward your home in tower defense strategy. In every level, you will have different sets of aliens army in turret defense which you have to deal with.

Need help? Use our Aliens Earth Invasion TD Walkthrough page or sign up and make your contribution today.

Fix some bugs and crash.

Aliens Earth Invasion TD is a free-to-play, adventure and strategy game developed by Hollis Inman, and is available for download on both iOS and Android devices. The app is compatible with iOS 8.0 or later on the following devices: iPhone 11 Pro, X, Xs, SE, iPhone 8, 7, 6, iPad Pro and iPad Mini. 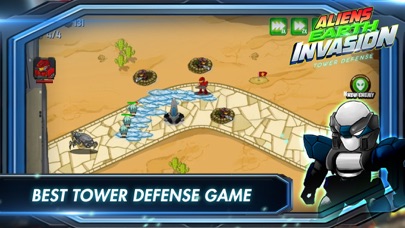 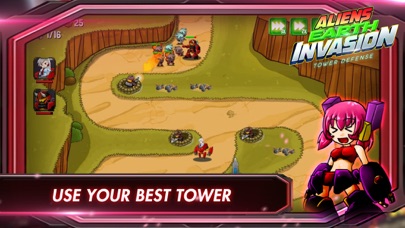 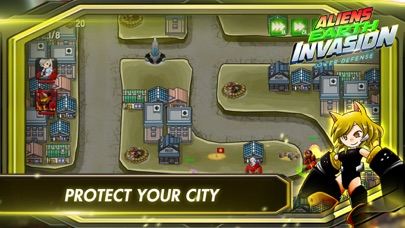 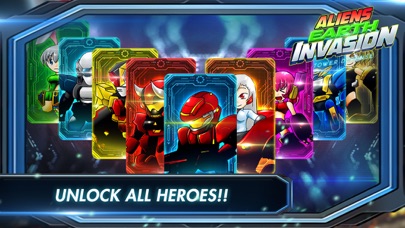