Run! Jump! Save the world!

One of the most fun endless runner games! Players join Talking Tom and his heroic friends on a mission to run, get gold and rebuild the world! Playing this new action game will make anyone a true superhero!
- ANYONE CAN BE A SUPERHERO: Talking Tom, Talking Angela and their super friends all have amazing unique superpowers that they can use while running! Players can also try using their high-tech superhero gadgets!

- RUNNING THROUGH AWESOME WORLDS: Players will fight the raccoons among skyscrapers, alongside tropical surf beaches, through Chinese-inspired villages, and in mysterious desert temples.

- EXCITING STUNTS: In this fun game, each running world is a unique adventure. Players can dash and leap between rooftops, swing on cranes, and run along cruise ships, but they need to watch out for swimming pools!

- RESCUING AND REBUILDING: Raccoons are destroying and polluting the world and it’s up to players to drive them away so that you can clean up and rebuild. Once each location is fixed up, it’s time to face the Raccoon Boss. After players defeat him, it’s on to the next running world! What’s it going to be? A surf beach? Or maybe a temple?

Players who love Talking Tom Gold Run and other running or superhero games are going to want Talking Tom Hero Dash in their collection too!

This app contains:
- Promotion of Outfit7's products and advertising;
- Links that direct customers to Outfit7’s websites and other apps;
- Personalization of content to encourage users to play the app again;
- YouTube integration to allow users to watch videos of Outfit7's animated characters;
- The option to make in-app purchases;
- Items to purchase (available in different prices) using virtual currency, depending on the player’s progress; and
- Alternative options to access all functionalities of the app without making any in-app purchases using real money.

Need help? Use our Talking Tom Hero Dash Walkthrough page or sign up and make your contribution today.

New event on the horizon: Join the Queendom of Bees event and win premium rewards! Can you collect enough honeycombs to unlock the all-new Queen Bee Angela?

Talking Tom Hero Dash is a free-to-play action game developed by Outfit7 Limited, and is available for download on both iOS and Android devices. The app is compatible with iOS 10.0 or later on the following devices: iPhone 11 Pro, X, Xs, SE, iPhone 8, 7, 6, iPad Pro and iPad Mini. 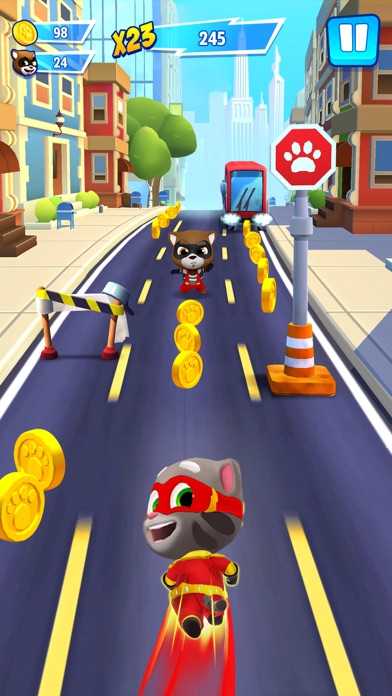 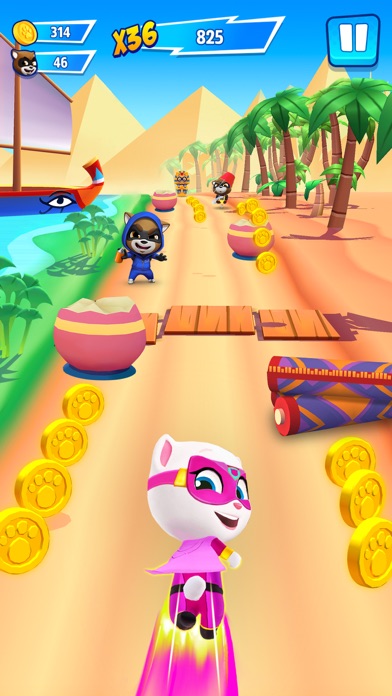 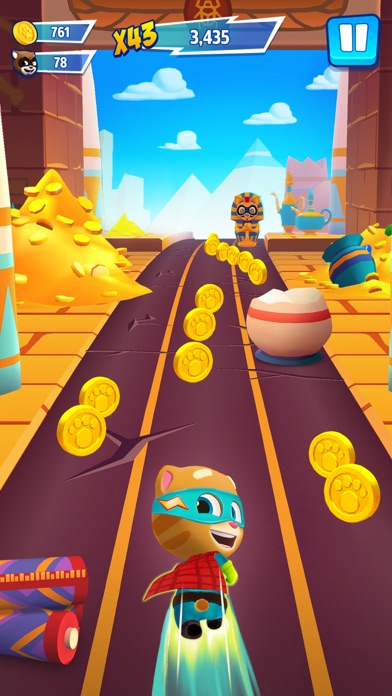 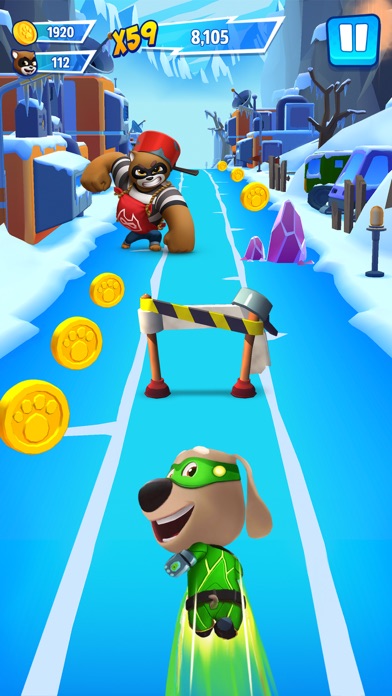 Review: Love it. I also want to be a superhero, too. Play this please. !!!

Review: Very fun but sometimes freezes The only reason why I didn’t give 5 stars is because the game froze twice right after I’d passed...