Build your kingdom, summon epic heroes, train powerful troops, and fight cross-server wars with over 2 million players all over the world in real time, right in the hottest new strategy game of 2020!
[Alliance at war] combines both Real-time wars and round-based battles! As you move forward, legendary heroes will join your team to help you lead troops to conquer the demon cave, look for treasures, and kill enemies, thereby becoming an army that makes the enemy tremble with fear! Right here, you can also work together with your allies to attack territory, seize ancient artifacts, occupy Stronghold and Royal city, and make a name for yourself in the cross-server war that starts twice a month!

Game Features:
*Unique Hero System
The hero plays a significant role in the game. Unique heroes will join you as the game progresses, including the Commander who is good at counterattacks, the Sorceress who is able to melt enemy armor with flames, the Paladin who enhances troop morale and brings blessings, and the Oracle who helps you improve luck in battle. However, the speed with which you recruit and train them greatly affects your troops' combat performance and strategy abilities!

*Diversified Unit Strategies
Various types of units are available for recruitment here, including Infantry, Mage, Catapult, Cavalry, Ballista, and Archer. With different stats, they’re able to counter each other. Besides, you’re free to boost your might by upgrading your troops with enhanced equipment.

*Rare Ancient Artifact
The reappearance of the lost artifact provoked a fierce battle in the kingdom. The player who completes the server quest first will get the artifact with unique skills and buffs. But be careful, the enemies stand ready to take it away from you!

*Cross-Server War
You’re free to sign up for this war every two weeks to compete with alliances from different servers around the world. In this event, you can invade your opponents’ Stronghold on other servers to conquer them and plunder spoils, thus ranking top in the event and winning handsome rewards!

*The Stronghold Fighting Day
Players can participate in the Stronghold event every week. With the occupation of the rare Stronghold, the alliance not only wins glory, but also enjoys the privileges it brings, including resource protection, units upgrade, combat protection, and other special features. Also, the strong alliance buff and rich weekly spoil rewards will help your alliance gain an advantage!

*War of Throne
It is an event where you need to occupy the Blood Palace and activate the Dark Tower to attack the Royal City with your allies! The alliance leader who wins the war will become the King, enjoying privileges and wielding supreme power!

*Various Alliance Events
Varieties of alliance events are waiting to be explored, such as Arena, Cave team-up, Pappas’ Treasure, Spirit Orb Collection, Hunting event, etc. These events require both strength and collaboration, and you’ll get great rewards to help you grow faster!

*Update and Support
We will continue to breathe new life into the game while making further progress. In Alliance at war, you can reach out to our support team for real-time help whenever you have problems and share your ideas to improve the game! We look forward to meeting you in this magical world and working with you to create an increasingly better game!

A new player with no gaming experience? Visit our Facebook page, YouTube, Discord for a full list of tips! And there are also experienced players guiding here and helping you to grow!

Need help? Use our Alliance at war: magic age Walkthrough page or sign up and make your contribution today.

New gameplay Defense Against Pappas is now online! In this event, players can only participate once a week, and the Leader and the Premiers can start the event at any time. Also, there are plenty of rewards waiting for you here. During the event, only 2% of your troops in a battle will be injured, and the rest will be converted to minor injuries, resulting in no deaths.You can find the event on your alliance page, check it out! Event Optimization and Adjustments 1. Added a countdown to Frozen Campaign, which will be triggered when Designar's HP is reduced to a certain level and there is only one player left in the Contest Server. If no player enters the Contest Server until the end of the countdown, the Boss Target wins. 2. In Crusade Against Barbaton, the challenge phase will be automatically switched if the rally phase or solo phase is not defeated for a certain period. 3. Increased the HP of Barbaton. 4. Now when the guardian's star rating is maximized, you're free to use the extra guardian shards to exchange for the shards of other guardians. New Features and Adjustments 1. Added a SVIP, coupled with a new avatar frame, VIP icon, and better buffs and privileges. Players who have reached VIP 15 and still have extra VIP Exp can activate it manually. 2. Greatly improved the rewards of the Path of Honor. After the update, all players' progress on the Path of honor will be cleared and will be compensated according to the points earned and the legendary/epic rewards purchased. 3. Adjusted the effect of stats related to resource consumption. The resource consumption of some players may be slightly increased or decreased. 4. Reduced the effect of training penalties as the number of units increases. Players now can train units more quickly. 5. Adjusted the contents of some VIP Daily Packs. 6. Added a reminder to the main screen to show players the event packs that are on sale. 7. Added an alliance email to notify players that the Stronghold has been abandoned. 8. Added battle reports to Artifacts. Players will now receive emails after activating some artifacts. Other Adjustments 1. Players who are now muted will not be able to send messages on all channels, including chat rooms. 2. The Last Online time in the alliance member management interface has been changed to server time. 3. The minimum number of cave challengers on floors 19 to 22 has been changed to 3. 4. Players now can access the Event Map of Frozen Campaign when their cities are on fire. 5. Fixed other existing glitches.

About Alliance at war: magic age

Alliance at war: magic age is a free-to-play strategy game developed by Hour Games Co.,Ltd, and is available for download on both iOS and Android devices. The app is compatible with iOS 10.0 or later on the following devices: iPhone 11 Pro, X, Xs, SE, iPhone 8, 7, 6, iPad Pro and iPad Mini. 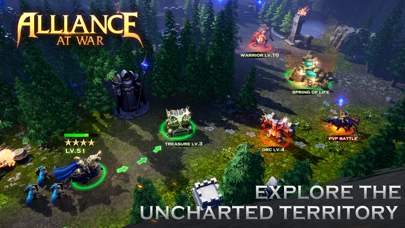 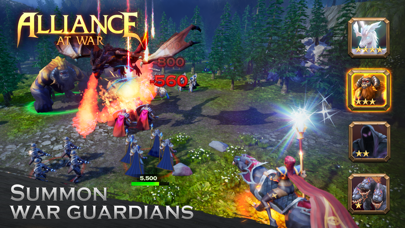 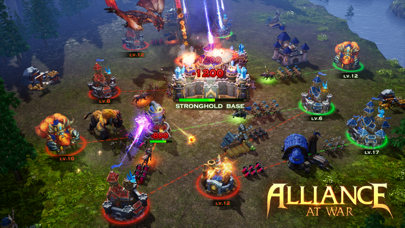 Review: Fun game This is like so many of the build/fight GOW style out there but, it is fun.

Review: '  Love this Game. Please do create a voicecha '  I downloaded the game last night, and played for about two hours before I realized. I needed to be in...

Review: ' Very good game‌ ‌​  ' '  I love this game I’ve played some of the others also.but this one is the best(In my...