Never again spend your time waiting in vain. Whether on the bus, the train or waiting for friends. Go into a not too far future when no human being was on earth anymore. Start a journey from your stable into a stunning landscape full of adventures and fight in captivating battles against your enemies! Take on the challenge and play one of three exciting modes, online or offline, against friends or alone! Play lovingly developed levels and conquer the stolen food back or prove your tactical skills and play for a top place in Survival Mode ranking! Choose from an ever-growing selection of units and worlds in one of the best rated strategy games 2019!Join the Hungry Chicks community today. Glory, honor and food await you!

FIGHT WITH UNIQUE CHICKEN UNITS:
• Coop, defend the stable and throw deadly egg bombs!
• Ninja, fast, sword armed melee fighters who storm forward and help you move the
front!
• Bazooka, egg-shooting ranged warriors with multi-shot abilities to keep enemy units
at bay!
• Shield, strong melee fighters with shield against bazooka shots and balloon bombs.
Place them well to protect your other units!
• Balloon, throw egg bombs at enemies below you and drop healing eggs to refresh
troop health!
• Mage, make the world burn through using the firestorm skill, do damage over time
and cause area damage!

PLAY ONE OF THREE EXCITING MODES:
ONLINE
• Multiplayer, take on your friends or random opponents in epic battles!
• Prove yourself in online multiplayer mode, either in a duel with your friends or against
random opponents from around the world.
OFFLINE
• Survival Season 2, survive as long as you can, and capture high amounts of food for your stable!
• Perfect your tactics and compete with your friends in the fight against ever stronger
opponents. (Global ranking requires internet connection)
• Adventure, play unique levels and collect successes!
• Challenge captivating chapters with ever new obstacles and enemies.

IMMERSE YOURSELF IN A UNIQUE WORLD:
• Return to your stable between battles and manage your chickens.
• Redistribute your levels and revise your strategy for your next mission
• Play on your farm in lovingly drawn comic style
• enjoy the rural idyll as long as you can, the enemy knows no mercy
• Don't be fooled by the rural idyll between mountains, windmills, fences and heaps of
straw. The enemy knows no mercy!
• Conquer and destroy the enemy stable to capture the stolen food.

FEATURES:
• Games online(multiplayer) or offline(survival, adventure)
• 5 unique classes (Stable, Ninja, Shield, Balloon, Bazooka)
• Each class has its own special ability
• Connect to Facebook or Google and save your progress in the Cloud
• Attractive comic-style graphics
• Earn food to upgrade your chickens
• Each step up makes you more powerful
• Choose your troops wisely or get overrun!
• Family-friendly: suitable for children, women, men
• Tower Defense
• Free and exciting
• Games, fun, excitement: Quality made in Germany

Need help? Use our Hungry Chicks Walkthrough page or sign up and make your contribution today.

Hungry Chicks is a free-to-play, strategy and action game developed by Benjamin Dums, and is available for download on both iOS and Android devices. The app is compatible with iOS 10.0 or later on the following devices: iPhone 11 Pro, X, Xs, SE, iPhone 8, 7, 6, iPad Pro and iPad Mini. 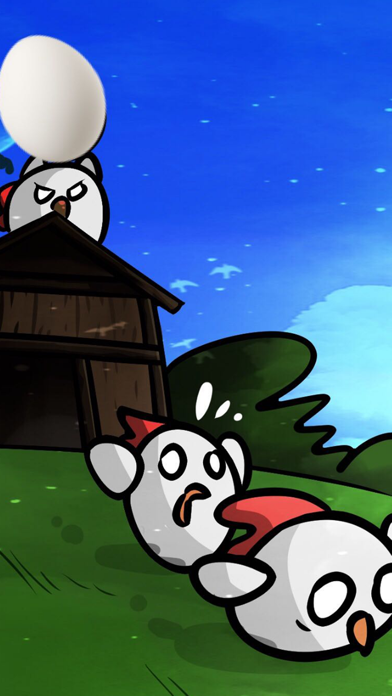 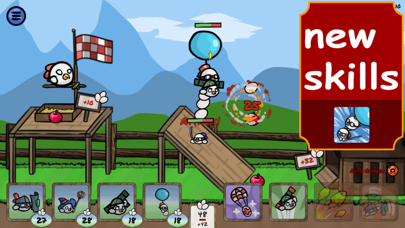 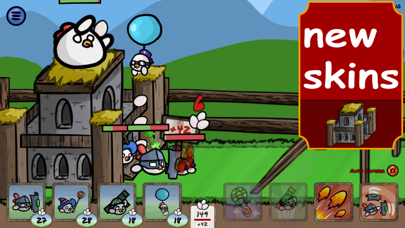 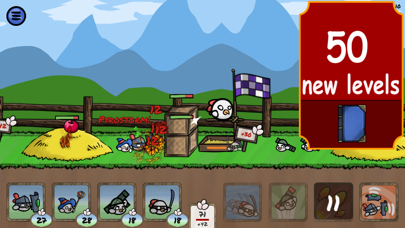