The prehistoric times of the wild are back once again bringing with it the ruins of ancient grounds from the dinosaur city to the world as we see today! Awaken from some dead quiet caves of history have arose the wild dinosaur t rex simulator preparing to abduct in the city mayhem through his wild attack! For the most part people believed that it was a mechanical model type wild dinosaur for a film shoot but then they saw it making way towards the city causing massive city mayhem!This dinosaur simulator game allows you to become that Jurassic creature who aims to take revenge from humanity being responsible for the extinction of their wild dinosaur species! The city is fear stricken upon sighting the dinosaur jungle simulator and they run for their lives from the wild attack, whichever the vengeful dinosaur has up his sleeve. He wishes to regain the dinosaur city for his clan!
You must help the wild dinosaur t rex simulator in fulfilling his revenge and rushing into the city environment for some wild and destructive simulator attack. Only then will you be able to avenge for the dinosaur city! the wild dinosaur must plan for a massive planned city mayhem to pay the price of diminishing the dinosaur city!
To cause the desired amount of city mayhem and restore the dinosaur city, rush into the city first and create panic among the people so that once they are aware and start running about, they’ll be so panicked they wouldn’t know where they are heading towards. But once they are running about you can corner them and wild attack them immediately!
Run loose in the dinosaur city and wild attack on everything in sight! The city is decorated with various banners and there are extremely tall and heavy buildings which the wild dinosaur simulator can easily destroy! The dinosaur just has to give a hard and solid jump and everything within its closest reach will fall to pieces!
Similarly, use the controls on the screen such as the moving joystick to run the dinosaur around after people. Also, there are several controls given on screen which help the dinosaur in attacking and creating havoc within the city! Doesn’t that make for a fun city mayhem then?
Join us on this wild dinosaur city mayhem simulator game with the angry dinosaur as furious as ever! With the simulation of this dinosaur game you ought to experience a whole new level of prehistoric fun!
HOW TO PLAY DINOSAUR SIMULATOR CITY HUNTER:
• Start the dinosaur game to begin playing
• Choose the dinosaur simulator you wish to play with
• Select the level
• Rush in to the dinosaur city
• Use joystick on screen to move the dinosaur in the city
• Using attacking controls onscreen make angry dinosaur get wild
• Jump to destroy and break things near
• Use controls to break buildings and banners and then attack at the people of the city
• Destroy the entire city like that
• Complete task in the required and given time
• The levels will harden with procession
• Each level has different tasks and targets
• With the help of navigation map locate and reach the game target
• Complete all levels

Need help? Use our Dinosaur Simulator City Hunter Walkthrough page or sign up and make your contribution today.

Dinosaur Simulator City Hunter is a free-to-play, action and simulation game developed by Saad Hameed Khan, and is available for download on both iOS and Android devices. The app is compatible with iOS 8.0 or later on the following devices: iPhone 11 Pro, X, Xs, SE, iPhone 8, 7, 6, iPad Pro and iPad Mini. 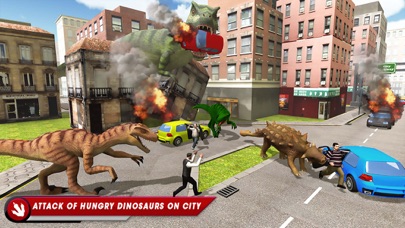 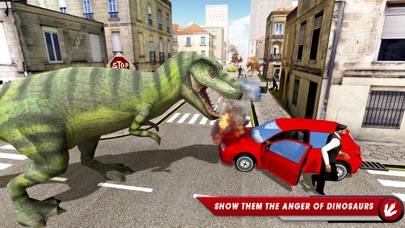 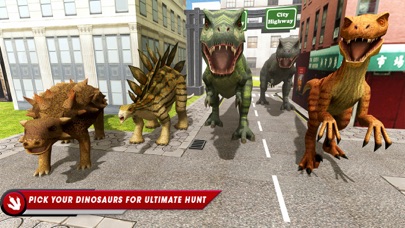 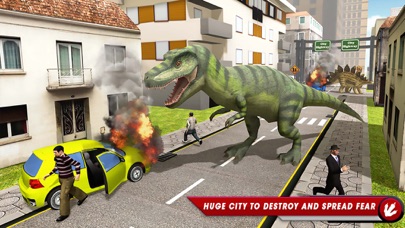 Review: 'Great game but just one thing' 'I like your game a lot but please put in a sandbox mode'

Review: 'Amazing game' 'I have been playing this app for years it’s great 💚🖤💚'

Review: Amazing game I have been playing this app for years it

Review: Amazing game I have been playing this app for years it

Review: 'This game is cool but' 'I think this game needs more levels'

By Nick make not taken