Join the BEST WATER FIGHT of your life! Pack your water balloons. Grab your water guns. Get ready for the mission and get your opponents soaking wet! Plan a sneaky attack and collect the other team’s Coins and Energy. Use them to BUILD AN UNBEATABLE CAMP! And upgrade your Camp as fast as you can to get cool water weapons before your enemies!
Play this brand new, cool water fighting battle builder game – it’s amazing fun!

HOW TO BE THE BEST

BUILD YOUR CAMP
Construct an unbeatable Camp. Be quick and set it up before the other teams see you. Set up your Troop Shop, Hero Hall, Tower, Coin Factory, Energy Generator, and more. Level up your Minivan and the buildings in your Camp to get the best weapons and the most Energy to beat the other teams.

DEFEND & PLAN ATTACKS
Set up defenses like the Sprinkler, Tower, Puddle, Catapult, Cannon, and more. Protect your Troops, your Camp, and your Gold while you plan a unique water fight strategy! Build up your Troops and lead them to glory! Make the invaders run away!

WIN THE WATER FIGHT!
Grab your Water Gun, Slingshooter, Wingsuits, and other weapons. Use the right tactics and head straight into the action! Test your skills and train yourself to perfection in the SINGLE PLAYER Campaign episodes. Attack your enemies and fight in the mega MULTIPLAYER online battles. Progress through the levels and join your Troops with those of other players. That way you can play in even bigger battles! These serious fights are serious fun!

COLLECT GOLD & ENERGY
Win the most exciting water battle of the summer and level up! Collect Gold and Energy from other online players and use them to upgrade your Camp. Get your opponents' resources before they get yours or… Sneak behind enemy lines and steal them!


Hurry up! Join players all over the world and WIN THE WATER FIGHT in this amazing battle builder game with incredible design!

Talking Tom Camp is a free game with the option to purchase items to help you progress through the levels faster.

This app contains:
- Promotion of Outfit7's products and third party advertising
- Links that direct users to other apps and Outfit7's websites
- Personalization of content to entice users to play the app again
- The possibility to use and connect with friends via social networks and to use in-app chat
- The option to make in-app purchases
- Items are available for different prices in virtual currency, depending on the current level reached by the player
- Alternative options to access all functionalities of the app without making any in-app purchase using real money (level progress, games, in-game functionalities, ads)

Need help? Use our Talking Tom Camp Walkthrough page or sign up and make your contribution today.

Talking Tom Camp is a free-to-play, action and strategy game developed by Outfit7 Limited, and is available for download on both iOS and Android devices. The app is compatible with iOS 10.0 or later on the following devices: iPhone 11 Pro, X, Xs, SE, iPhone 8, 7, 6, iPad Pro and iPad Mini. 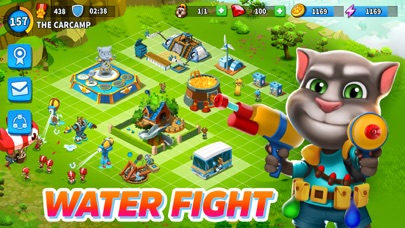 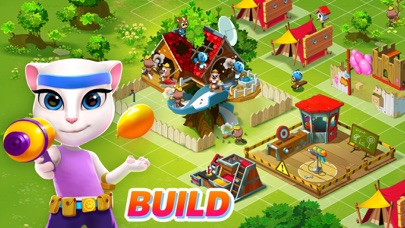 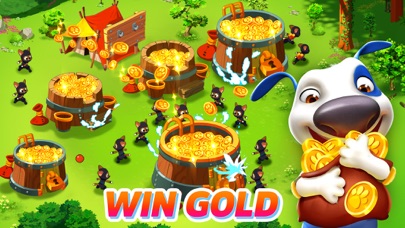 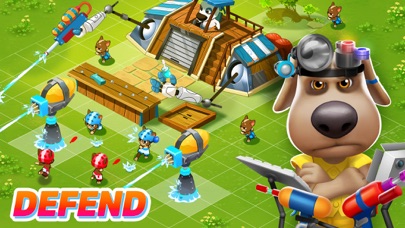 Review: 'Boring' 'Fun at first but then you get everything to max level and that’s it.'

Review: 'Nice but Could use some updates' 'I play it for like 2 days and i did not hear anything'

Review: 'campaign' 'you need to keep working on the campaign because i’ve waited 1 year for the other levels. it’s a...

Review: 'Amazing game' 'I love playing it I would like there to be less adds on your games though'

By taylor n i