Get Revenge on Robocallers.

Being able to receive legitimate calls is just as important as blocking unwanted ones. While RoboKiller fingerprints calls to detect spam, it screens for real human callers. If the call isn’t spam, we’ll tell you who’s calling and why before you answer. Unwanted calls get eliminated, while your food delivery or ride-share driver can still reach you.

But wait - there's more! RoboKiller doesn't just block robocallers and spammers, we annoy the hell out of them, too. Spam calls are sent to clever recorded messages called Answer Bots so they can see what it feels like to have time wasted. Finally, get that oh-so-sweet revenge on robocallers.

24/7 UP-TO-DATE PROTECTION
New spammers are continuously added to our global spam radar so your phone never rings from unwanted calls.

GET REVENGE ON ROBOCALLERS
Fight bots with bots! Answer Bots deliver payback in hilarious fashion, sending spammers to clever recordings that you can listen to later, driving them crazy and giving you the last laugh!

RoboKiller has been featured on The New York Times, NBC, Wired, Engadget, Vice, and other publications.

RoboKiller is built by people who hate robocalls and respect privacy. We promise to never sell your data, spam you, or waste your time. Our mission is to stop robocalls forever, or die trying!


FEATURING:
• Life without robocalls - 99% of unwanted calls are eliminated
• Call Screening - see who’s calling and why before you answer
• Pause Call Blocking - temporarily stop calls from being blocked if you're expecting an important call from an unknown number
• Take control of who can and can’t call - choose the phone numbers you wish to block, and allow the ones you want to hear from
• View all missed and blocked calls in your Recents to see who’s trying to reach you
• Help out the community by reporting spammers and providing feedback directly from within the app
• Dedicated customer service team of real people available 7 days a week

RoboKiller is free to download. A subscription is required to use the service, but you can try it out completely free for 7 days. Once the trial ends, your subscription will automatically renew and you’ll be billed monthly. You can cancel your subscription at any time.

Hey there, RoboKillers. We’re excited about the updates in 5.2. Here’s what’s inside: • Made a few changes to improve call quality, including fixing a bug that caused some calls to drop when switching between WiFi and LTE • We love call feedback! --> ⁧ We’ve updated our feedback experience and added a new “Thank you” screen when users provide feedback • AirPod support is back! This update fixes an issue where calls wouldn’t use AirPods if you were recently using them with your device • Fixed an issue that caused some calls to drop when switching between WiFi and LTE • Fixed a visual bug that caused the call status on the Recents screen to be different from the Details screen • Added a few updates to the practice call onboarding flow • Updated technical support live chat access • Improved voicemail onboarding for some users who are new to RoboKiller • Fixed an issue that caused some call details to display “Why was this call screened?” button instead of “Why was this call blocked?” *************************** ROBOKILLER 5 AND BEYOND RoboKiller 5.0 and beyond has arrived. We’ve completely rebuilt RoboKiller from the ground up with more spam blocking goodness than ever before, plus loads of extras. **OPEN THE APP AFTER UPGRADING** This update requires you to enable new settings to take advantage of our major spam blocking improvements. Now back to what’s in this update. First and foremost, RoboKiller now eliminates 99% of spam calls (yep)! We’ve also added a new Call Screener and dark mode. Oh, and we redesigned the app for a clean, modern look. Hope you like these updates as much as we do! What’s new (a lot!): • Call Screening (optional)! An extra layer of protection that’s like having a personal assistant. Call Screening identifies and blocks the most sophisticated spammers while letting unknown numbers such as a doctor’s office, ride-sharing, delivery drivers, or other important callers get in contact with you. The RoboKiller Call Screener asks callers for their name and why they are calling. Then we send you their transcribed responses so you can decide whether to answer. • RoboKiller now lets you know when it’s analyzing a call. • Complete redesign, including dark mode. • Text transcriptions for all blocked and screened calls. • Text transcriptions for voicemails. • Updated the Practice Call to make onboarding smoother • You can now segment between Missed/Blocked/Voicemails on Recents. • Pause RoboKiller right from the Recents screen. • RoboLookup Enhanced Caller ID: see as much information possible about unknown callers before you answer. • RoboLookup Call Verification: see user feedback for unknown callers before you answer • Safe Call notifications: Missed Call Notifications are now Safe Call Notifications so that you know that a caller has been verified as safe and may be worth calling back. Customize your app icon: choose your RoboKiller. What’s changed: • Answers Bots and your Block/Allow lists are now accessible in Settings. • An updated call feedback experience. • We’re no longer constrained to blocking a list of known spammers. Instead, we’ll investigate all unknown callers. Fixed stuff: • This update significantly reduces background activity to eliminate battery drain caused by RoboKiller. • No more random spoofed calls getting through. • You’ll never see a “RoboKiller has been disabled” notification again. • Disappearing and spinning Call Blocking & Identification extensions are a thing of the past. • Fixed a bug that caused some calls to drop at 5-minute intervals. The extras: • Check out our Support Help Center articles to learn more about all the awesome new stuff. • All calls that are deemed safe get returned to users as VoIP calls. • RoboKiller 5.0 needs Microphone permission now, so when we return a safe call to you, callers can hear what you say.

RoboKiller - Stop Spam Calls is an application developed by TelTech Systems and released on iOS. The app is compatible with iOS 12.0 or later on the following devices: iPhone 11 Pro, X, Xs, SE, iPhone 8, 7, 6, iPad Pro and iPad Mini. 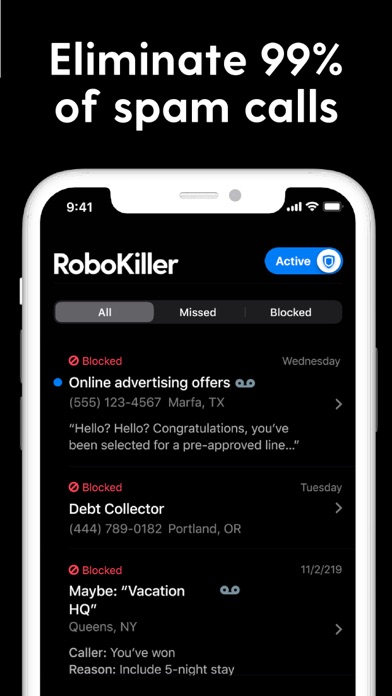 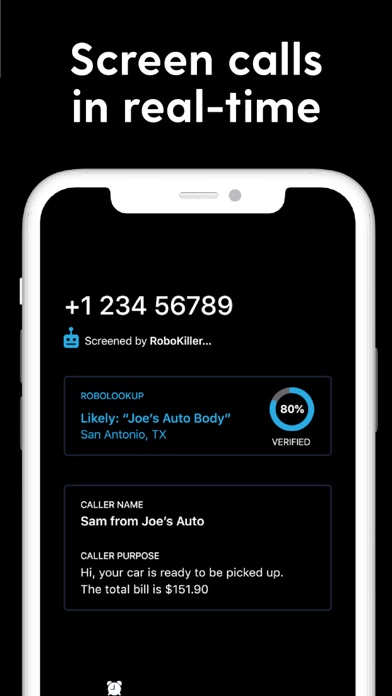 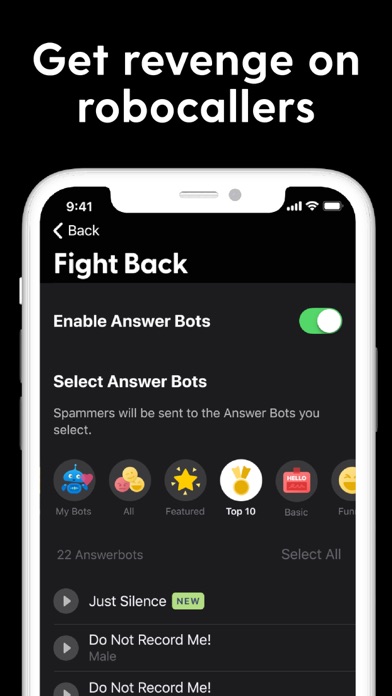 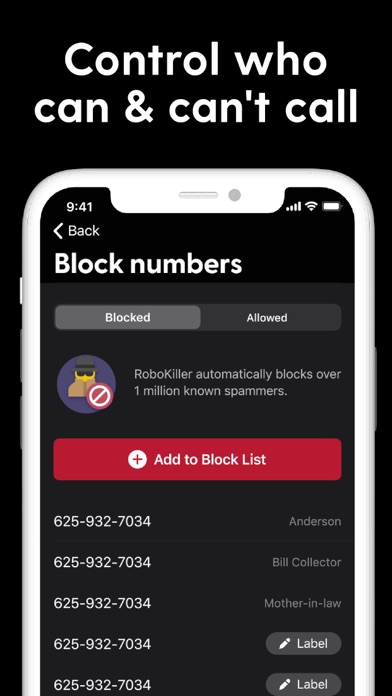 Review: 'Awesome app' 'This app has tremendously taken care of unwanted and annoying calls; I love how they also identify my calls; keep...

Review: 'Awesome' 'I get 50 spam calls and 65 spam messages a day and this worked now I only get 1 spam message a month...

Review: 'Stop messing with a good thing!' 'PLEASE just do what you were originally designed to do! I don’t want Robokiller to answer my contact calls!!!\...

Review: 'Hasn’t been great for the past few months' 'It was great when I first started using it.\n\n The SMS filtering is not even worth being offered...

Review: 'Would like to be able to stop temporarily.' 'Robokiller is very effective. But, my Mom and I use a wheelchair van service when she goes to medical appointments,...