Enjoy your favorite card game without any timers, lives or limits! Online or offline, play the best classic trick-taking card game designed specifically for your iPhone and iPad. Plus, it’s 100% free! Simple Euchre has that traditional feel you’ve been looking for, with intelligent computer opponents that are just as intuitive as any in-person challenger to sit at your table. Keep it fun and relaxing with this family favorite card game, and download Simple Euchre today!
GAME FEATURES

Euchre is a popular trick-taking card game that’s closely related to Hearts, Spades, Bridge and Whist. It is also known as Bacon in other English-speaking countries. The object of the game is for a partnership to win at least three tricks. If the side that selected trump fails to get three tricks, it is said to be “euchred”. Winning all five tricks is called a “march”.

Paired up into teams of two, each player receives 5 cards. The trump suit is determined through a bidding phase before each round. The Makers are the partnership who selected the trump suit and must win more tricks than the Defenders.

Players are required to follow suit after the leading card has been played. The player who played the highest value card of the suit that was lead will collect the trick. Points are awarded after each round based on which partnership won more tricks.

When one or more cards of the trump suit are in a trick, the highest trump suit card will win the trick. The team who reaches 10 points first win the game.

• Bowers: the highest cards in the suit
• Defenders: the partnership that did not order the trump
• Euchre(d): when a player calls trump and fails to get three tricks
• Eldest Hand (AKA 1st Seat): opponent to the left of the dealer
• Hand: a hand consists of five tricks (when all cards from the deal have been played)
• Kitty: the four cards left over after the deal
• Makers: the partnership that ordered the trump
• March: calling and getting all five tricks
• Order Up: declaring the trump suit
• Pone (AKA 3rd Seat): the opponent to the right of the dealer
• Singleton: a lone card of any given suit, when no other cards of that suit are held in your hand
• Stick the Dealer: a game option that forces the dealer to declare the trump suit if all other players pass in the 2nd round of bidding
• Trick: all four cards played by each player
• Trump: the suit that outranks all other suits
• Turn-card (AKA Up-Card): the top card from the kitty which has been turned face up

• Lead with a singleton off-suit whenever possible. If no other cards of that suit are in your hand, the probability of your opponents having them is higher which prevents them from trumping your ace. Your best shot for having an ace make it around the table and winning a trick is on the opening lead.
• Don’t always count on your partner for at least one trick. Doing so can end up backfiring and getting you euchred!
• Keep track of the cards played. While it’s important to pay attention to your own cards, keeping an eye on what cards have been played by your opponent's is just as important to see how it will affect the outcome of the game.

If you have any technical problems, please email us directly at [email protected]
Thank you!

Need help? Use our Simple Euchre Walkthrough page or sign up and make your contribution today.

Simple Euchre is a free-to-play, card and puzzle game developed by Magmic Inc, and is available for download on both iOS and Android devices. The app is compatible with iOS 7.0 or later on the following devices: iPhone 11 Pro, X, Xs, SE, iPhone 8, 7, 6, iPad Pro and iPad Mini. 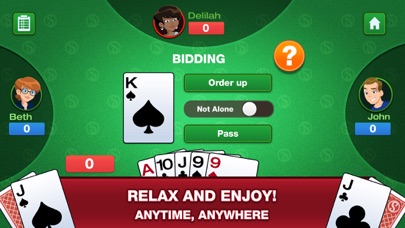 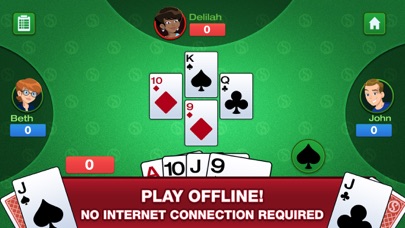 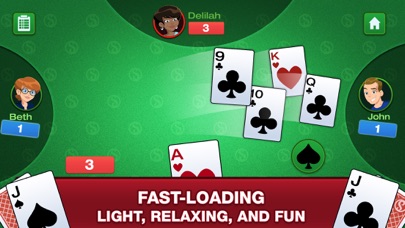 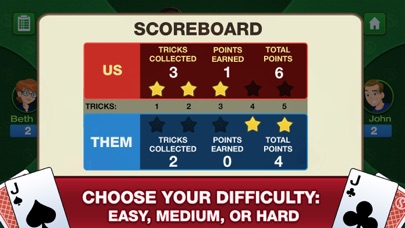 Review: Agnes My grandson plays this game in college and when we get together with him, (which is only every couple months),...

Review: It’s Fun Not super sophisticated but very enjoyable to play. Good game for beginners to learn the ropes of the game!

Review: Love it It gives enough variety to keep it interesting; granted, some of the bots are really dumb, but again- keeps it...

Review: One issue Need to fix bug where computer players can call trump on a suit after that suit has already been passed...